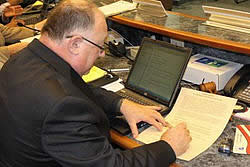 Park Forest, IL–(ENEWSPF)– The Mayor and Board of Trustees for the Village of Park Forest signed a Contract With the Future during the December 14, 2009 Board Meeting at Village Hall.

The contract will serve as a visual reminder of the elected officials’ commitment to serving the Village with integrity and dedication to sound democratic principles. Additionally, each signature affixed to the Contract With the Future is a commitment to the Village’s goals established for 2010-2011, which include:

This is the first year Village officials have signed such a contract.

Speaking on why the Board decided to implement a contract this year, Mayor John Ostenburg said, “These are trying times. They’re economically challenging times. There’s a lot of new needs that communities are facing that we did not face in the past, and to actually codify our commitment by signing a contract that we present to our community, I think, is an example of the commitment that this board has expressed and is willing to make.”

“The Village Board sets goals every year,” Trustee Gary Kopycinski said. “Placing this year’s goals on a contract and signing our names to them helps us set these goals apart, keeping them front and center throughout the coming year.”

The decision to create a Contract for the Future was made by Village Board Members during 2010 goal-setting meetings which occurred in October.

The Contact for the Future, signed by each elected official, will be displayed for the duration of the 2010-2011 year in the Village Hall lobby.

See the video of the December 14th meeting now by clicking here.