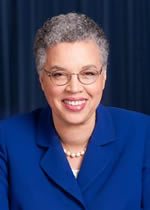 The ordinance will require individuals who lose, destroy, transfer or have their firearm stolen in the County, to report it to the Sheriff’s Office within 48 hours.  Individuals who fail to comply will be subject to a $1,000 fine for the first violation. Owners will be required to report the make, model and serial number of the firearm, along with the date and location of purchase.

“Far too often guns that were purchased legally wind up in the hands criminals,” President Preckwinkle said.  “This ordinance will help law enforcement crackdown on individuals who repeatedly fail to file reports yet claim their guns were lost or stolen after they are recovered from a crime scene.”

While the State of Illinois has enacted several laws to regulate the possession of firearms, it does not require owners to report them lost or stolen.  By addressing this loophole, the Sheriff’s Office will be empowered to work with local law enforcement to locate lost or stolen firearms and keep them out of the hands of criminals.

“As local law enforcement budgets continue to shrink, we need to be reasonable yet vigilant in our fight to ensure guns do not end up in the wrong hands and take illegal guns away from those who should not have them,” Sheriff Tom Dart said. “This ordinance does not take a single gun out of a law abiding citizen’s hands. It will allow law enforcement to go after individuals who are conducting straw purchases of guns for gangs and others who are obtaining guns illegally. I believe by passing this ordinance and working with local agencies we will be able to make our communities and streets safer places for our children and families.”

President Preckwinkle noted that a majority of gun owners are responsible, but believes this ordinance is necessary to address actions of those who are negligent or engage in criminal behavior. A recent study by the University of Chicago Crime Lab revealed that 29 percent of the illegal guns used in crimes recovered by the Chicago Police Department originated in Cook County.

“We are facing an epidemic of gun violence and our community’s need to mitigate this carnage has made public safety a central focus of my office,” said Cook County Commissioner Jesus “Chuy” Garcia (D-7th), who is the chief sponsor of the legislation. “Today, we took our efforts one step further by introducing an ordinance requiring individuals to report lost, stolen, destroyed, or transferred firearms. This is just one of many steps that will have to be taken to address gun violence on our streets.”

The legislation is co-sponsored by Commissioners John Daley, Edwin Reyes and Larry Suffredin.

The Cook County Board of Commissioners also passed a resolution today urging the Illinois General Assembly to adopt gun control legislation that would ban assault weapons and high capacity magazines; require registration of existing firearms and require background checks on all firearm sales at gun shows — commonly referred to as the “gun show loophole.”

“There needs to be a comprehensive effort from every level of government to keep military-style weapons designed for battlefields off our streets,” President Preckwinkle said. “I urge our representatives in Springfield to tackle common sense gun control legislation in the upcoming session.”