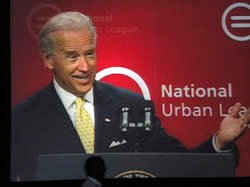 The morning began with Plenary III – The Vice President of the United States, Joseph R. Biden Jr. As Vice President Biden spoke to a room-filled audience, he spoke of the American Recovery and Reinvestiment Act as a major initiative established to restore our economic health. “Out of everything terrible something good will happen if you look good enough,” Biden said.

Stating that infrastructure is less than one-third of the economic recovery piece, Vice President Biden outlined other provisions of the ARRA including:

Biden concluded by quoting Whitney Young, “The hardest work in the world is being out of work,” and stating that “We must keep the faith and build a new economy.”

Mid-morning, the conference held a special forum “Preparing for the future: Partnership to Build America’s Workforce, moderated by President and CEO of the National Urban League, Marc H. Morial. The forum explored why and how business, government, academia and community based organizations can partner in innovative ways to rebuild America’s skilled workforce.” 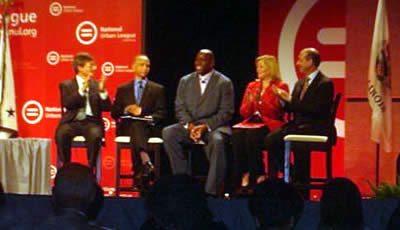 The panelist discussed the issues facing America’s workforce and the education system’s role in preparing the workforce of the future.

Johnson spoke of his foundation, which provides full college scholarships to 160 students. Johnson said that students must stop majoring in something sexy and major in something that gives them a career, stating “there is no job in sexy.” He also said with torn books, no labs, and no technology, urban schools are unable to keep up with many suburban schools.

Prahl questioned why we tolerate inequitable system in respect to education and stated that “historically we treat education as a property right that transfers with your property.”

She also spoke about Best Buy’s partnership with Earvin “Magic” Johnson, saying that they have formed partnerships with communities to “bring what people want, instead of what we think they want.”

Best Buy has taken the approach of involving the community in its decisions that affects the people of the community. Best Buy plans to open additional stores this year.

Wilson stated that businesses need to stand up and complain about our poor education system and that business and the public sector need to work together.

Dr. Goodman questioned what it would mean if every child went to school from age 3 to 2 years old, stating that it would raise the quality of life and establish a new foundation for this country.

Watson said that we will not fill the impact for six years of the cuts in education, throughout the country, “We have taken the student loan and made it a for-profit business for the banking institution. In another couple of years we are going to have another collapse and students will not be able to pay back the loans. The return on investment is worth grants versus loans.”

Watson also stated that an individual will make half a million dollars more if they complete an associates degree versus a high school education during their career. He also stated that 4 in 100 black males graduate from college. They are powerless and “the powerless don’t have a voice, they are not in the position to speak up.”

Watson spoke about the process technician program offered through the City Colleges of Chicago which prepares students to work an entry-level operators or technicians in the process industry. The program currently has 25 students. The students will make approximately $65,000 yearly once employed in the field.