A disruptive snowstorm is causing treacherous travel conditions over the midwestern and interior northeastern United States.

Conditions will be dangerous through Friday evening as snow spreads eastward. The heaviest snow is forecast to fall in southern Michigan and northern Indiana, where up to a foot of accumulation is possible.

Hundreds of flights have been delayed and canceled, while many schools are closed.

The National Weather Service has issued a Winter Storm Warning until 6 p.m. CST for portions of northwest Indiana and northeast Illinois. Moderate, to at times, heavy snow occurring. Plan on difficult travel conditions. Additional snow accumulations of 2 to 4 inches are expected. Be prepared for significant reductions in visibility at times. A Winter Storm Warning for snow means severe winter weather conditions are occurring. If you must travel, keep an extra flashlight, food and water in your vehicle in case of an emergency.

Visit flychicago.com for the latest updates on cancellations, and call ahead to check on your own flight status.

Metra said in a release it will make “every effort” to keep tracks clear and trains on time. The latest updates from different train lines are available on their website.

The BNSF Line, which is Metra’s busiest, will be reducing the number of trains on Friday from 84 to 94, which will likely result in more crowded conditions, but Metra said it will minimize switching moves that are often the cause of delays during snowy conditions. An alternative schedule is available online.

The Adler Planetarium will be closed during public hours on Friday, including scheduled film screenings, according to a statement released Thursday night.

The Circuit Court of Cook County will also be closed on Friday to “ensure that no one is placed in a position of danger in getting to court,” Chief Judge Timothy Evans said in a statement Thursday. There will be no court in session in any Cook County courthouse except Central Bond Court and juvenile detention hearings. The Office of the Clerk of the Circuit Court will be closed as well.

The Shedd Aquarium will be closed to the public Friday, Feb. 9 due to inclement weather conditions. The aquarium plans to reopen on Saturday, once conditions are re-evaluated.

ALL Illinois Secretary of State offices will be closed Friday — including the downtown Chicago location.

Wintry weather continues to plague travelers in Michigan, where several accidents are causing delays around Detroit. Some ramps, including the eastbound I-96 ramp to southbound I-275, are closed due to weather conditions.

Avoid I-96 eastbound around US127. It is closed east of 127 due to a jacknifed semi-truck, and numerous accidents are occurring west of 127 as a result of the slowdown. @MDOT_LanJxn pic.twitter.com/LFns3vyMk6

A total of 9 inches of snow have fallen within the past 24 hours in Belvidere, Illinois, according to the National Weather Service. 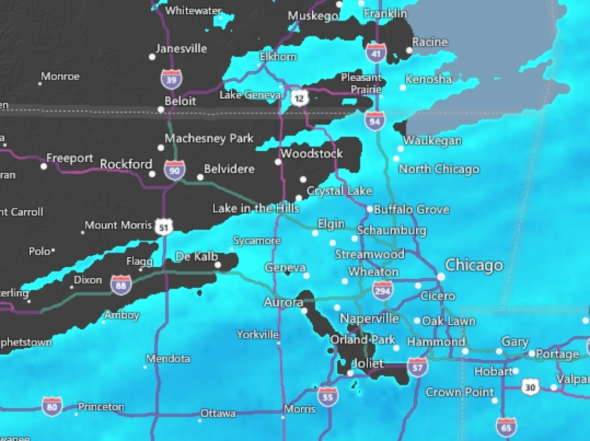 More than 800 schools are closed Friday across Michigan as the state gets blasted with snow.

Chicago has also closed a number of schools as a heavy snow band passes over the city. There have been reports of traffic accidents due to slippery travel conditions on Chicago roads.

Meanwhile, flight cancellations continue for O’Hare and Midway international airports. Some flights scheduled to arrive at O’Hare are facing delays of up to 1 hour and 33 minutes, according to the Federal Aviation Administration.

Previous articleBeginning Birding for All at Thorn Creek Nature Center on February 17
Next articleUnion Street Gallery Closed Friday, Feb. 9 Due to Weather