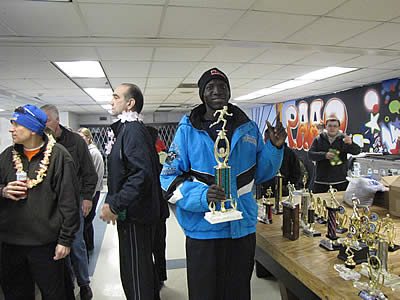 Park Forest, IL-(ENEWSPF)- He came from the world’s newest country and finished first in one of the United States’ coldest races.

Before the race, the eventual-first-place winner said he was, "Feeling good." Mom and Dad live in South Sudan, and must be very proud of their son, who obviously adjusted very well from the African heat to the winter of Park Forest.

Michelle Power was running her first race ever. How did she feel? "Nervous!" she told ENEWSPF.

Runners ranged from age 9 to 83, according to race director Joanne Rock.

"It is the most awesome place ever," Pope says. "We house about 250 kids from birth to graduation. We’re coming up on our 100th year anniversary in 2013." Wal Khat is one of four children from South Sudan living with Mooseheart.

"He loves to run. That’s all he thinks about is running. He’s a good kid," Pope says.

Dick Lamermayer of Aurora, IL, got the prize for being the oldest runner participating in the Cruise. At 83, he was the only octogenarian to register and show up for the race. He was pleased with his finish, which was 2 minutes 12 seconds faster than his race the previous day, Saturday, in Burbank, IL.

Yes, the man is an 83-year-old running machine.

The race drew over 200 runners. Temperature at race time?

More pictures from the race are here.