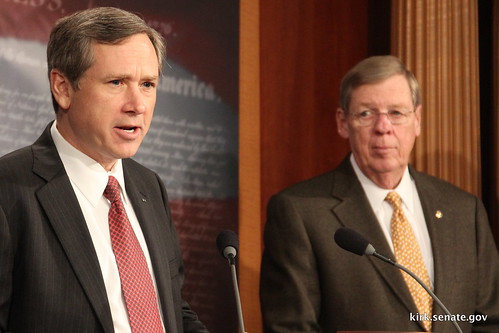 “We are located at the nation’s crossroads and this bipartisan bill will provide funding for critical Illinois transportation projects while reducing overall government spending.”

“Transportation is the heart of Illinois’ economy,” Senator Kirk said. “We are located at the nation’s crossroads and this bipartisan bill will provide funding for critical Illinois transportation projects while reducing overall government spending. I also am pleased the Committee adopted language that would direct the Federal Railroad Administration to report to Congress on the status of the Railroad Rehabilitation and Improvement Financing program. This is an underutilized loan program that should be better used to help finance high speed rail projects in Illinois and throughout the nation.”

The bill maintains funding levels for highway projects in Illinois while reducing overall spending by approximately $100 million from 2011 levels. The legislation sets Illinois’ federal funding limit at $1.349 billion, an increase of $5 million from 2011. The legislation also includes $100 million for high speed rail projects following the adoption of an amendment offered by Sen. Dick Durbin (D-Ill.). Sens. Kirk and Durbin repeatedly team up to support Illinois’ applications for funds, and since 2009, Illinois received more than $1.8 billion in federal high speed rail funding.

The transportation funding measure approved by the Appropriations Committee also contains language regarding a prioritiy from Sen. Kirk’s recently-introduced Lincoln Legacy Infrastructure Development Act, which would remove federal restrictions on the formation of public-private partnerships. The language included in the bill reads as follows:

“The Committee directs FRA (Federal Railroad Administration) to report on RRIF (Railroad Rehabilitation and Improvement Financing) loan activity for the preceding fiscal year in the annual budget submission to Congress, including the number of loans pending and issued and the processing time for these loans.”

RRIF is a rail-only financing program that provides low-interest loans to railroads, state and local governments, government-sponsored authorities and corporations, joint ventures that include at least one railroad, and limited option freight shippers who intend to construct a new rail connection. The program is authorized to issue up to $35 billion in loans that are financed by a credit premium paid upfront by the applicant. Less than $2 billion is currently loaned out. One of the reasons for this is the lengthy loan application process. Loans can often take nearly two years to finalize. The language included in the appropriations bill requires FRA to report to Congress on the status of pending loans and processing times as part of its request for funding from Congress.