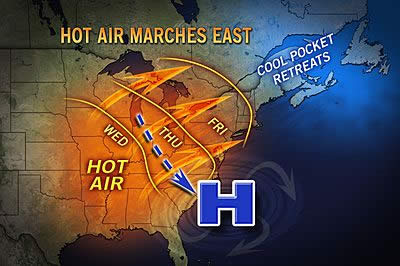 State College, PA-(ENEWSPF)- AccuWeather.com reports a heat wave breaking all-time records across the Plains will shift into the Midwest and East by late in the week and into the weekend, bringing 100-degree temperatures to more than a dozen states.

A large dome of high pressure has been promoting blistering sunshine across Colorado, Nebraska and Kansas with widespread highs reaching 100 plus. The area of high pressure will shift into the Midwest and East by Thursday and Friday, allowing dangerous heat and humidity to surge.

People are urged to stay indoors in air conditioning as much as possible, avoid strenuous activities outdoors and drink plenty of water.

Temperatures will be in the 90s in the Midwest on Wednesday before reaching 100 degrees across Missouri to Illinois and Indiana on Thursday.

The high will soar into the upper 90s in Chicago on Thursday. With humidity factored in, the AccuWeather.com RealFeel® temperature will be closer to 110 degrees.

The Southeast will start feeling the heat on Thursday as highs climb into the mid-90s. Again, AccuWeather.com RealFeel® temperatures will feel like 100 degrees and higher.

The core of heat will continue to shift farther north and east on Friday with 90s in the mid-Atlantic. New York City to Washington, D.C., will once again hit the 90s. At the same time, portions of the Southeast will skyrocket to the 100-degree mark.

Saturday will be the peak of the heat for the East with communities from Atlanta to Washington, D.C., approaching and surpassing 100 degrees.

The temperature in Atlanta has not reached 100 degrees or higher since Aug. 22, 2007, but that should change on Saturday.

A cold front will erase the heat for portions of the Northeast, including Boston and New York City by Monday. Meanwhile, the southern mid-Atlantic and Southeast will continue to scorch into July Fourth.