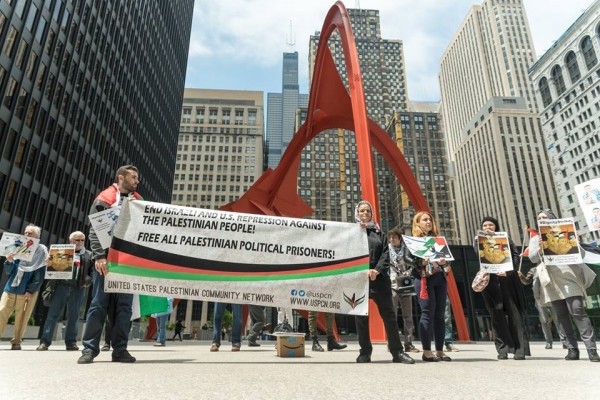 CHICAGO–(ENEWSPF)–May 26, 2017.  Yesterday, May 25th, USPCN-Chicago organized a lunch time picket attended by over 75 people, to pressure U.S. Senator Dick Durbin to take a stand in support of the 1,800 Palestinian political prisoners on hunger strike since April 17th in Israeli jails.  Chanting for over two hours at the Federal Plaza in downtown Chicago, the picketers represented a number of organizations, including Students for Justice in Palestine (SJP), Palestinian American Community Center, 8th Day Center for Justice, Jewish Voice for Peace (JVP)-Chicago, Council on American-Islamic Relations (CAIR), and Arab-Jewish Partnership for Peace and Justice in the Middle East, amongst others.

At 1 PM, a delegation of leaders from USPCN, 8th Day Center, and JVP, plus two Chicago-area family members of Palestinian hunger strikers, visited Durbin’s office for a scheduled meeting with his staff.  (The Senator himself was in DC.)  The family members gave powerful and compelling testimony, and the rest of the delegation strongly demanded that Durbin agree to 1) write a public letter in support of the hunger strikers, like this one from U.S. Congressman Danny Davis, and 2) use his political connections and clout to directly pressure Israel to meet the prisoners’ basic demands, which include the restoration of regular family visits, an end to solitary confinement, an end to administrative detention (imprisonment for months without trial or formal charge), the strengthening of medical care, and access to education.

When staff members tried to deflect accountability from the Senator by asking if anyone had reached out to the U.S. State Department, the delegates pointed out that the racist Trump administration is no friend of the Palestinian people, and that Durbin cannot skirt his responsibility.  The meeting concluded with a promise from the Senator’s staff to follow up with USPCN, but neither demand has yet been met.

Entering the 40th day of the hunger strike, the prisoners are facing serious health decline, with 160 of them taken to hospitals in the past two days, so we need to continue pressuring the Senator to take a stand.

Yesterday’s picket comes in the midst of USPCN’s National Week of Action, which has seen protests or visits to legislators or both in New York, Detroit, DC, Chicago, and San Francisco.  As a result of the lobbying efforts of some friends of USPCN on the West Coast, the Democratic Party of California has officially adopted a resolution denouncing U.S. support of Israeli occupation of the West Bank and Gaza Strip, and rejecting efforts to conflate all criticism of Israel or zionism with anti-Semitism.