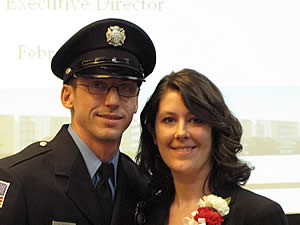 Park Forest, IL-(ENEWSPF)- The Regular Meeting of the Village of Park Forest Board of Trustees held on Monday, February 20, 2012, at 7 p.m. provided an evening of embracing the future and honoring the past.

In his opening statement, Mayor Ostenburg stressed the need for a Level 1 Trauma Center in the South Suburbs. Currently, the nearest Level 1 trauma center is Christ Hospital, located on 95th Street in Oak Lawn. The mayor mentioned that on Sunday, March 25 from 2-4 p.m. at Freedom Hall, there will be a Public Forum to address this need. Congressman Jesse Jackson Jr. will be the keynote speaker for the event, and William McNary, Executive Director of Citizen Action, will serve as Master of Ceremonies.

Village Manager Tom Mick began his presentation by introducing fire chief Robert Wilcox and Lieutenant Steven Bobzin. Wilcox, Bobzin, and other members of the Park Forest Fire Department gathered to welcome three new firefighters to the Village of Park Forest. The ceremony included the traditional badge pinning ceremony – a symbolic gesture in which the fire department invites the family of newly inducted firefighters to come and meet their extended new family on the fire department.

Lieutenant Bobzin then introduced the new firefighters. Kevin Grove – a 24 year old originally from Crete but now living in Crown Point, IN – joined the force as a member of a firefighting family (his brother Neil also serves in Park Forest, and his father Dennis recently retired from serving as Assistant Chief in Crete). Grove holds an Associate’s degree in fire science from Prairie State College. Previously, Grove served on the Crete Township Fire Protection District as well as the Kankakee Fire Department. Pinning Grove’s badge was his wife Lindsay. The second firefighter sworn in this evening was Raymond Peterlin. Raised in Crete by parents Raymond and Diane, Peterlin has connections to Park Forest back to his youth soccer days. Peterlin began his firefighting career in Crete as a Paid on Call member and has also served in Richton Park. Peterlin’s mother Diane pinned his badge. Finally, Tyler Triemstra joined the force as the newest firefighter at the age of 22. Triemstra has also grown up around the fire service, as his grandfather is a retired firefighter and his uncle currently serves as a lieutenant in South Holland. Triemstra’s career began in Beecher at the age of 19, and he has also served on the New Lenox fire department. Triemstra’s badge was pinned by his mother. The mayor concluded the ceremony by offering his thanks to all public servants for the jobs they do.

The next item on Village Manager Mick’s report was an update to the Board and public on PADS (Public Action to Deliver Shelter). South Suburban PADS Executive Director Mike Wasserberg and Deputy Director Michael Cobb were present to inform the Board and Park Forest residents on the status of current projects. The PADS Mission Statement explains that the group is an “Interfaith organization providing shelter and supportive services for homeless persons. Compassion, hospitality and dignity are key components of the PADS program.” Since its inception, South Suburban PADS has served 11,500 men, women, and children (thirty-four percent of members have children). PADS began 21 years ago with emergency overnight shelters with supportive services added in 1994. Services today include two transitional and two permanent housing programs. Now South Suburban PADS is working to empower its homeless guests to get permanent housing. PADS broke ground in September for a permanent supportive housing facility in Country Club Hills near I57 and I80 (in the area of 167th St. and I80 between Cicero and Pulaski). This facility will be 75,000 square feet and includes 77 units of supportive housing as well as a full slate of supportive services for residents. Units will include studios (23), one bedroom apartments (34), and two bedroom apartments (20).

Anyone facing homelessness is eligible to reside in the facility, and but PADS stresses the importance of housing for victims of domestic violence, homeless veterans, and homeless households with a disabled adult. The anticipated budget for the project included $20,440,000 in construction and fees, but this funding has already been achieved. PADS is still looking for additional funding for supportive fees ($350,000) and operating costs. Community support for the project is integral, and Park Forest alone has raised $103,000. However, the project will still have ongoing costs, so continued support is needed. Those interested in donating can make payments directly to the project, and there will be a community outreach in Park Forest in March.  Seventy-two Park Forest families were served by PADS between 2009-201. This is the equivalent of 1,944 nights of shelter, 5,832 meals, and a cost of $35,964. Trustee Gary Kopycinski questioned Executive Director Wasserberg about where Park Forest ranks in comparison to other communities in donations. According to Wasserberg, Park Forest – along with Homewood and Chicago Heights — ranks in the top three communities for donations but that “with your encouragement, Park Forest will take the lead.”

Other dates to note include the meeting of the Senior Commission on Thursday, March 1 as well as the Saturday, March 3, Rules Meeting which will be held at 8 a.m.  This meeting is also open to the public. Village stickers go on sale March 1 at a cost of $50, and there is a 50% discount on one vehicle for seniors. Residents need to purchase and display village stickers by May 1.

Robert McCray, Board Liaison to the Library, stated that WomenLore will offer a reading of one of Agatha Christie’s works as part of its programing on women in history. On Sunday, February 26, at 2 p.m., Betsy Means will give a live performance of Christie’s “Packing for Syria.” The Library also currently has an outreach for persons in the Village or anyone in the audience to submit to them any stories about his or her life growing up in Park Forest or Olympia Fields. Anyone interested in submitting a story can contact the Park Forest Library for more information.

Clerk Sheila McGann reminded the community to call the Deputy Clerk for more information in regards to the early voting that will be from February 27 to March 15.

On Saturday, March 24, at 6 p.m. at Freedom Hall, the Village of Park Forest will host a concert celebrating the life and legacy of Dr. Martin Luther King Jr. Musicians and alumni from Rich Township will perform this evening. On Saturday, April 21 at the Flossmoor Country Club, the Tall Grass Arts Association will hold its annual “Beau Arts Ball” fundraiser.

Trustee Georgia O’Neill stated that the Economic Development Advisory Group is currently developing a policy tax abatement to bring to the Board in June. Trustee Gary Kopycinski stated that the Human Relations Committee would be meeting Saturday, February 25, at Freedom hall from 2-4 p.m. Kopycinski encouraged Park Forest residents to consult the 2011 Discover Magazine’s five-page article on the topic of grants and other sources of Village funding. This article can be found on the Village website and would enable the public to see the tremendous amount of money coming to Park Forest because of the efforts of Village staff.

Though much time at this evening’s Board Meeting was spent on planning for future community events and development, the night would not be complete without honoring Rhoda Adler — someone integral to the Village of Park Forest’s past. Adler — a tireless volunteer for Life Source Blood Centers for many years – passed away last week at the age of 78. Steadfast in her service to the community, Adler was not only inducted into the Park Forest Hall of Fame but also received many national awards. Board Members expressed their condolences to the entire Adler family.