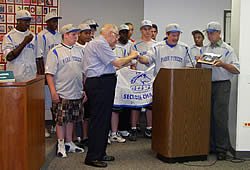 Park Forest, IL–(ENEWSPF)– The Park Forest Village Board passed an Identity Theft Prevention Policy at its Monday Regular Meeting. The policy was mandated by the Federal Trade Commission to protect consumer’s personal information primarily because Park Forest acts as a creditor by providing water to residents and billing for it later.

According to Finance Director Mary Dankowski, “Although municipalities are not the focus of this federal legislation, the requirement applies to all ‘creditors’ which under the Act includes ‘Any person who regularly extends, renews or continues credit.’ The term ‘person’ is defined to include governmental subdivisions and agencies. The term ‘credit’ is defined to include the right granted by a creditor to a debtor to ‘purchase property or services and defer payment.’ Because municipal utilities provide water to their customers in advance of being billed for that water, municipal utilities are considered to be creditors falling within the requirements of the Act.”

The policy was assembled after review of several samples shared by various organizations, according to Dankowski. Water Department staff attended training in March of 2009 on the Red Flag Rules. The FTC requires the development and implementation of written identity theft prevention programs by August 1, 2009.

In other action Monday night, the Village Board approved an Intergovernmental Agreement for “Public Safety Interoperable Communications Radio Loan Program” between the Village of Park Forest and Cook County. The board also gave permission for Director of Public Works Ken Eyer to enter into contract to purchase one 2-1/2 ton dump truck/snow-fighter for $100,167.00.

The board also approved a bid for 2009 water main improvements for Orchard Drive. The low bid was from Dominic Fiordirosa Construction Company, Inc. Elgin, Illinois, in the amount of $469,859.00 plus a 5% contingency of $23,493.00 for a total of $493,352.00. According to Director Eyer, The 2009/2010 Budget did not appropriate any funds for this project. The Budget will require an amendment to provide funding for this project. There are sufficient funds in the water fund for this work. The board also authorized the Village Manager to enter into an amendment to an Engineering Services Agreement with Baxter & Woodman which would provide a not to exceed amount of $57,000 for construction related services for the Orchard Dr. 2009 Water Main replacement project. The agreement was first passed on May 11, 2009.

The writer is a Park Forest Village Trustee.