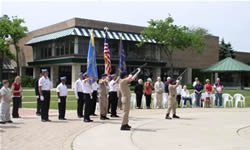 Veterans salute and fire rifles on Memorial Day in honor of those who have died in our nation's service. (Photo: ENEWSPF)

The ceremony opened with a prayer and some words from Rev. Fred Blacksmith from the Abundant Life Christian Fellowship.

“Today we remember the men and women who have laid their lives down for our country,” Blacksmith said.

Amongst the sounds of birds chirping and echoes, the national anthem was then played, and wreaths were placed under the flag by two veterans in attendance.

Navy Veteran Lt. Cmdr. Edward Spires spoke to the crowd about being an American and American Values.

The American flag was then folded, the symbolism of each fold explained, followed by a closing prayer from Blacksmith.  The ceremony concluded with a presentation of the color guard and a rifle salute.