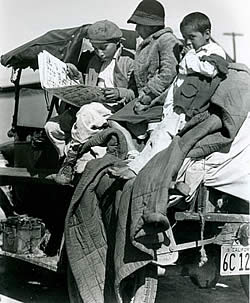 Mexican Americans forced out of the United States during the Depression. (PHOTO SUPPLIED)

University Park, IL–(ENEWSPF)– The Title V-Latino Center for Excellence at Governors State University is sponsoring a special presentation by journalist Vicente Serrano of his documentary exposé, “A Forgotten Injustice,” on October 8, at 4:30 p.m., in The Center for Performing Arts.

This is the first documentary film to uncover the true story of the almost two million Mexican Americans and U.S. citizens who were forced to leave the United States during the Great Depression in the 1930s. “A Forgotten Injustice,” is the result of an extensive investigation. Serrano traveled across the country and Mexico to capture the experiences of these men and women, many who are still living in extreme poverty in rural areas in Mexico. The documentary includes interviews with historians, politicians, and survivors.

Serrano will answer questions and discuss his research after the film. This event is free and open to the public. Governors State University is located at 1 University Parkway, University Park, Illinois. For more information, call (708) 534-4553.