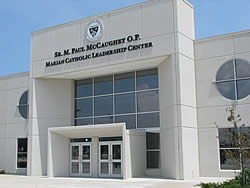 Sr. Mary Paul currently serves as Superintendent of Catholic Schools for the Archdiocese of Chicago.

The graduate of the University of Notre Dame returned to Marian as its fifth principal in 1992 and served as President from 1994 through 2008. A “pillar” of the south suburban community for many years, McCaughey was the catalyst in building the Leadership Center that opened in 2007. The primary component of the Courage to Lead Capital Campaign, the Center serves as a student union, cafeteria and home of Marian’s Leadership Program for students.