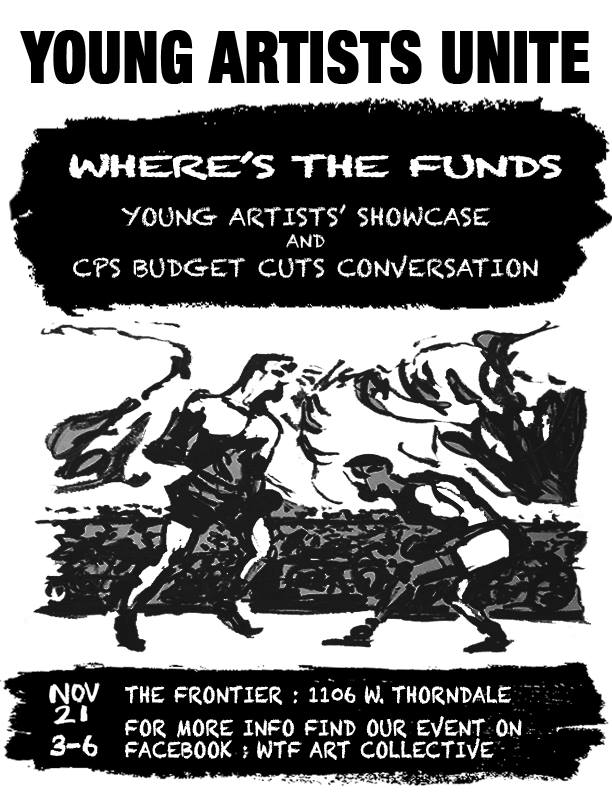 CHICAGO—(ENEWSPF)—November 19, 2015 — Chicago Public School Students (CPS) invite those affected by the CPS financial crisis and those who enjoy quality art, to come to an exhibition made in response to the state government’s inability to provide funds and the mismanagement of such funds by CPS administration.

Due to the past actions of the Chicago Board of Education, numerous cut have been made to some schools, but not others. This has created an unfair distribution of quality among CPS schools. Adding to the financial issues, as a result of the failures of the Governor and the General Assembly, the CPS organization is not receiving the money it needs to properly function, causing budget cuts that include the firing of 5,000 teachers.

This Saturday, November 21 at The Frontier Theater, 1106 W. Thorndale, Avenue from 3:00 p.m. to 6:00 p.m., CPS Students will be displaying their art in protest of the inefficiency of the politicians that are meant to provide for us, but have failed to do so in the past.

We are using our art to protest to ensure that they do better in the future. Even more importantly, the art shown will display the phenomenal and often forgotten artistic ability that Chicago Public Schools have nurtured within their students. The exhibit will feature pieces from students all over the city, spoken word poetry, original songs and various painted works.

The movement, which has included a study-in, two Friday rallies and numerous letters to Governor Rauner and Mayor Emanuel, have united their protest with the hashtags #wheresthefunds and #FundOurFutureNow.

Unlike the events preceding it, this art exhibit’s intent is to focus more on unifying the CPS Student Body under the cooperative spirit that is so often inspired by art. The event is meant to display the motley and talented group that are Chicago Public Schools students as much as it is to show our politicians what they are depriving us of with their disputes.