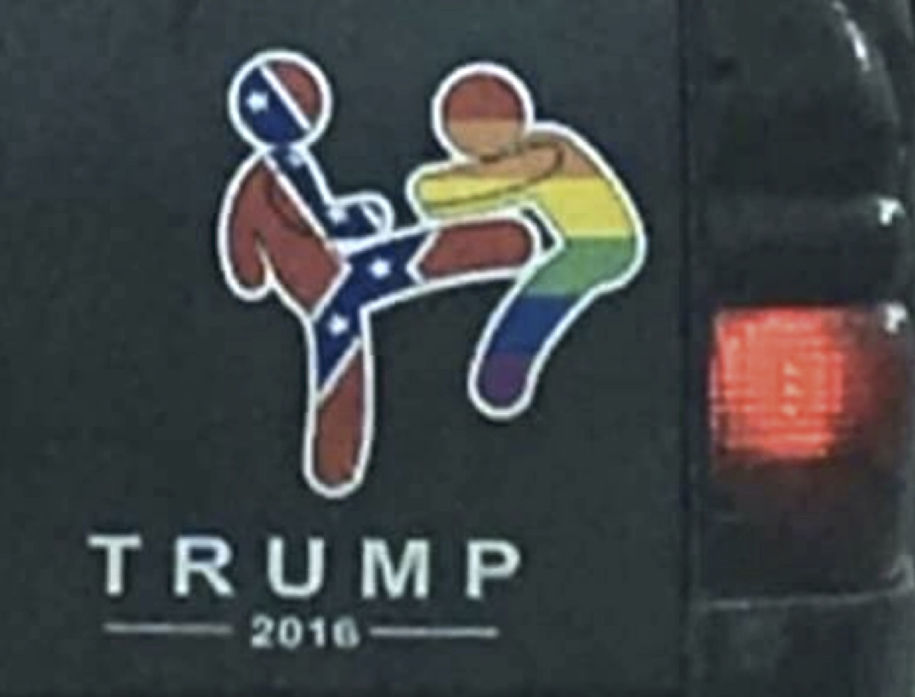 A Trump supporter proudly displays his bigotry and hatred

People across the nation are terrified, but LGBT Americans are truly suffering deep pain, fearful that their livelihood and even their very lives are in danger. From Mother Jones:

Trans Hotline, a nonprofit that focuses on suicide prevention for transgender people, has received at least five times the call volume it normally gets. And the Trevor Project, the nation’s only LGBT youth-focused suicide prevention hotline, received more calls, texts, and online chats on Wednesday than it’s gotten on a single day in four years, more than double its normal daily volume.

“We started getting increased call volume at about 10 p.m. on election night, and it hasn’t slowed down at all,” said Gretta Martela, director of Trans Hotline, on Thursday afternoon. “In fact, it’s on the rise still.” The hotline receives about 100 calls a day normally. In the 24 hours prior to speaking with Mother Jones, Martela said it had received 523 calls.

These are only some of the reasons people are terrified:

The “most dangerous thing” about Trump “is his tone and his hateful words,” added Mara Keisling, executive director of the National Center for Transgender Equality (NCTE).

“We know from historical precedence and human psychology that if he doesn’t change his sense of humanity quickly and dramatically, he is going to — whether intentionally or not — encourage a lot of dangerous behavior,” Keisling told ABC News today.

And Trump is promising to roll back protections:

Though Trump has not released a specific policy plan on LGBTQ+ rights, he has said he wants to “terminate every single unconstitutional executive order signed by President Obama.”

Others are scrambling, rushing to courthouses to get married, taking whatever legal steps they can to protect themselves, especially transgender citizens:

There is currently a social media movement to help trans people get legal help to change their names and listed gender/sex on official documents due to fears they might not be able to do so under Trump’s administration, according to Kris Hayashi, executive director of the Transgender Law Center.

If you need to talk to somebody, please don’t hesitate to use these services. We will get through this together.

Previous articleTop ISIS Commander Killed as Battle Continues in Mosul
Next articleRobert Reich Gets It: Why We Need A New Democratic Party