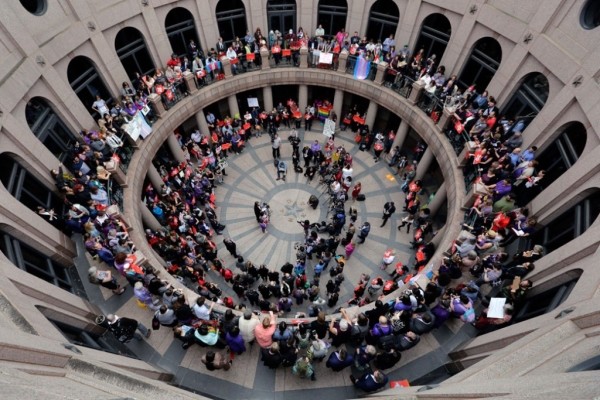 Members of the transgender community and others protest in the exterior rotunda at the Texas state capitol, March 2017. AP/Eric Gay

Washington, D.C. —(ENEWSPF)–May 2, 2017.  New research conducted by the Center for American Progress shows that a staggering one in four lesbian, gay, bisexual, and transgender, or LGBT, people reported experiencing discrimination in 2016 and that many frequently make significant changes to their everyday lives to avoid that discrimination. The data from a nationally representative survey were released today in conjunction with the reintroduction of the Equality Act, landmark legislation that provides clear, vital, and overdue protections from discrimination for LGBT people.

Despite unprecedented progress toward LGBT equality over past decades, there exists no explicit, statutory federal protections against discrimination based on sexual orientation or gender identity. Most states have yet to adopt them either. This forces many LGBT people to live in fear of losing their jobs, their housing, or being denied the same access to public accommodations or education that non-LGBT people enjoy. As such, many LGBT people report altering their lives to avoid discrimination.

“LGBT people face widespread discrimination across most facets of American life,” said Laura E. Durso, Vice President for CAP’s LGBT Research and Communications Project. “As our research shows, more than one in four LGBT people report having been discriminated against just last year. Even the threat of discrimination is enough to force many LGBT people to hide who they are and who they love from their neighbors and employers, self-censor their public speech, avoid the public square, or even move away from family. This pervasive discrimination prevents LGBT people from enjoying the full promise of our nation’s guarantees of life, liberty, and the pursuit of happiness.”

The ways in which LGBT people report altering their lives to avoid discrimination include keeping discussions about personal relationships vague or hidden, removing items from their resume, avoiding speaking out about LGBT issues in social situations, making important decisions on where to live, shop and where to study. Many have cut important people out of their lives and avoided social situations depending on the environment in which they live. These self-censorship behaviors increase in prevalence for those who have experienced discrimination in the last year.

The Equality Act is the first comprehensive nondiscrimination legislation for LGBT people introduced at the federal level. It would provide protections for LGBT people in all aspects of life including housing, employment, public accommodations, credit, and education. First introduced in 2015 by Sen. Jeff Merkley and Rep. David Cicilline, today’s reintroduction includes dozens of other members as sponsors.

“We’ve made tremendous strides as a nation—but as this new report shows, discrimination against LGBT Americans is still shockingly and unacceptably common,” said Sen. Merkley. “Passing the Equality Act would send a powerful message that such discrimination has no place in America. It’s time to take the next step to move equality forward in our nation.”

“Fairness and equality are core American values. But millions of LGBT Americans are still viewed as less than equal in the eyes of the law today,” said Rep. Cicilline. “I’m proud to introduce the Equality Act of 2017 with Sen. Jeff Merkley. This bill ensures that every LGBT person can live their lives free from the fear of discrimination. Above all, it’s about honoring the values that have guided our nation since its founding. It’s critical that Congress pass the Equality Act into law.”