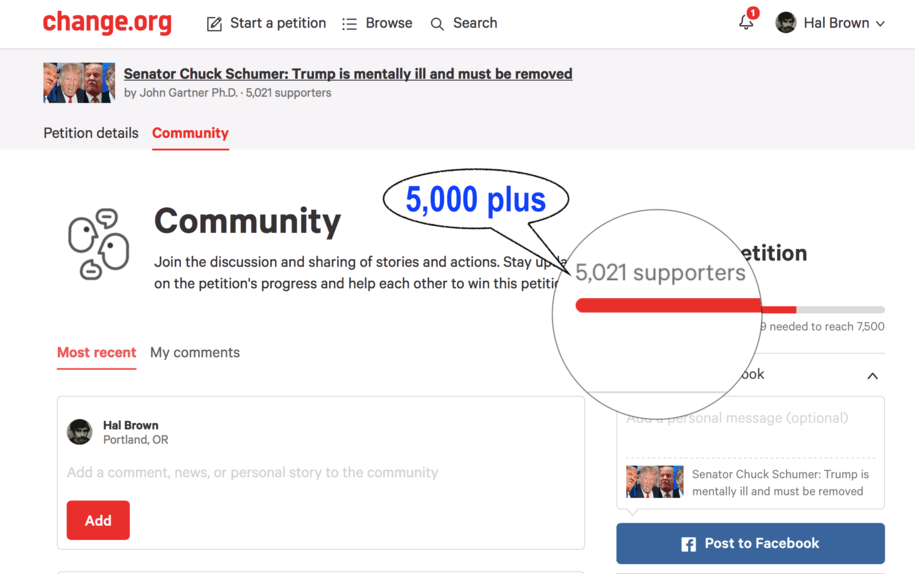 We, the undersigned mental health professionals, believe in our professional judgment that Donald Trump manifests a serious mental illness that renders him psychologically incapable of competently discharging the duties of President of the United States. And we respectfully request he be removed from office, according to article 3* of the 25th amendment to the Constitution, which states that the president will be replaced if he is “unable to discharge the powers and duties of his office.”

(The relevant section in No. 4, but I am sure Sen. Schumer will get the message. “Whenever the Vice President and a majority of either the principal officers of the executive departments or of such other body as Congress may by law provide, transmit to the President pro tempore of the Senate and the Speaker of the House of Representatives their written declaration that the President is unable to discharge the powers and duties of his office, the Vice President shall immediately assume the powers and duties of the office as Acting President.”)

As I write this the petition to Senator Chuck Schumer requesting that President Donald Trump be removed from office under the 25th Amendment has accumulated close to 5000 signatures from mental health professionals in four days. I am confident it will hit 5000 today.  An hour later it hit 5000 and we are all hoping for the next milestone of 7500.

Hopefully Dr. Gartner will soon get the media to report on this. I will do my bit with Daily Kos. Hopefully all Kossacks will do theirs.

Dr.  William Doherty got major MSM attention, including a long New York Times article, with his “Public Manifesto: Citizen Therapists Against Trumpism” having 2200 plus signatures. He avoided criticism for breaking the Goldwater rule by defining Trumpism as an ideology not a diagnosis.

He refused to allow any of the therapists on his Facebook group to discuss diagnosing Trump even though this was a page the public could not see. I objected to this and was asked not to post. Myself and several senior therapists I know left the group.

I wrote about Dr. Gartner and his petition on January 28th under the title TRUMP TEMPERAMENT TANTRUM: Another therapist minces no words in diagnosing Trump 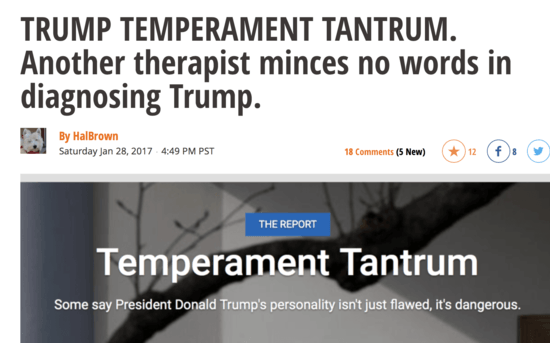 I suggest you read the entire article in U.S. New and World Report. Here are some excerpts”

“Donald Trump is dangerously mentally ill and temperamentally incapable of being president,” says Gartner, author of “In Search of Bill Clinton: A Psychological Biography.” Trump, Gartner says, has “malignant narcissism,” which is different from narcissistic personality disorder and which is incurable.

Gartner acknowledges that he has not personally examined Trump, but says it’s obvious from Trump’s behavior that he meets the diagnostic criteria for the disorder, which include anti-social behavior, sadism, aggressiveness, paranoia and grandiosity. Trump’s personality disorder (which includes hypomania) is also displayed through a lack of impulse control and empathy, and “a feeling that people … don’t recognize their greatness.

“We’ve seen enough public behavior by Donald Trump now that we can make this diagnosis indisputably,” says Gartner. His comments run afoul of the so-called Goldwater Rule, the informal term for part of the ethics code of the American Psychiatric Association saying it is wrong to provide a professional opinion of a public figure without examining that person and gaining consent to discuss the evaluation. But Gartner says the Trump case warrants breaking that ethical code.

Here’s an attention grabbing headline, is this article from BiPartisan Report.

Gartner says that individuals with malignant narcissism often lack impulse control and empathy. He also says many who suffer from this disorder believe that others around them don’t recognize their greatness.

As Psychology Today notes, “Malignant Narcissists will go to great lengths to achieve their aim.  They can be intelligent, high functioning (hold an important job for example) soft-spoken, charming, tearful/seemingly emotional, gracious, well-mannered, kind and have the ability to form relationships. They may lie, falsely accuse, dramatize, smear, cheat, steal, manipulate, accuse, blame or twist to get what they want and feel justified in doing so. Because they are entitled, egocentric and desperate, they do not experience it as wrong.”

‘Determined to gratify their wishes and furious if thwarted. Their desire can be so consuming that there is little comprehension of, respect for or ability to empathize with the other.  They lack guilt or remorse and tend to feel or pronounce that it is they who have been mistreated. They can be of any gender, race or social class.’

As if that weren’t enough, malignant narcissism is incurable.

Hopefully this petition will have an impact. I am sure I can confidently say this is the first time a member of Congress, all of Congress, has the benefit of a psychological assessment of a president from (aprox) 5000 mental health professionals.

Some of the reasons people signed the petition. Hopefully Schumer will review them:

Based on my experience as a mental health nurse for many years, it appears that trump has narcissistic personality disorder. Because of this. he will make decisions and “act out” based on his disfuctional view of the world. This is a very dangerous situation. His reactive way of decision making has already created discord, fear and anger in Americans. Trump is not psychologically fit to perform the job of president. He must be removed from office immediately.

The evidence has been mounting that Trump is a Malignant Narcissist with destructive intentions that have already weakened our nation and threaten the world overall. He must be removed from power.

DT is mentally ill. Please remove him NOW… S+S of MALIGNANT NPD, Impulsive borderline personality disorder and much more…also may have ADHD, DYSLEXIA, DEMENTIA, ALZHEIMERS. He should be evaluated by a real doctor and psychiatrist immediately! Thanks

I think the level of narcissism and impulsivity in Mr Trump’s actions is a very dangerous combination.

I am a Ph. D. Psychologist that has always had concerns about Trumps mental health and he continues to validate my concerns.

Trump exhibits all the criteria for being labeled a sociopath and a narcissist. With the power behind the POTUS, he believes that his power and reach is limitless. He has the nuclear codes. What happens when a country stands up to him? He is the most dangerous man on the planet, and we, the American people, must STOP HIM NOW!

As a military Member, I swore an oath to defend the United States against all enemies, foreign and domestic. As an Attorney, I swore to uphold The Constitution. This Administration scares the hell out of me. We’re at war, people, right here and right now! Resist and contribute to that effort an any way you can.

This is the most unstable and corrupt president. He will not abide within the boundaries of the law. History will reveal that all along he is in partnership with Vladimir Putin. He keeps creating distractions while he pushes his personal agenda rather than the good of the country. He has shown us over and over that he has no moral restraints and will act on what his narcissistic delusional self grandiziing agenda. He and his entire cabinet reek of self serving agendas they should be removed for the good of the country before any more havoc explodes. The preservation of the country and the safety of the world depends on his removal. Please, please act promptly on his removal along with his cabinet!