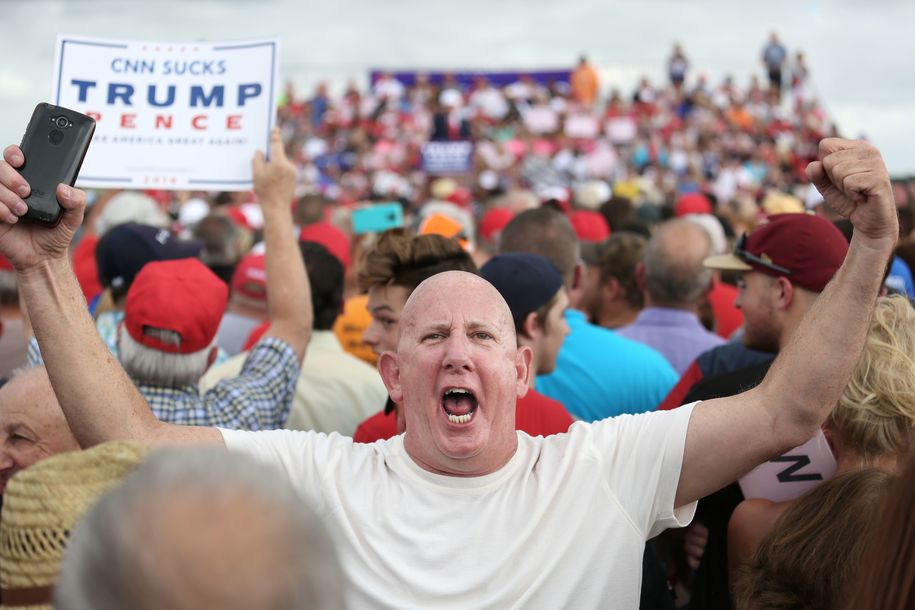 Over the last few decades we’ve had to suffer one Republican conspiracy theory after another about Democratic voter suppression. Whether it was ACORN, or Mickey Mouse registering to vote, or voter ID, conservatives have relentlessly undermined the perceived integrity of our voting system.

And now we have Donald Trump talking about the election being “rigged,” because if there is one group of people subjugated in America, it’s white billionaires. Yet suddenly we’re seeing stuff like this:

The only “large scale voter fraud” going on this year is the Donald J. Trump presidential campaign.

Or Ohio Secretary of State Jon Husted, a Republican and avid vote suppresser himself:

Our institutions like our election system is one of the bedrocks of American democracy. We should not question it, or the legitimacy of it … [Saying the election is rigged is] irresponsible.

And even Paul Ryan:

“Our democracy relies on confidence in election results, and the speaker is fully confident the states will carry out this election with integrity”

So what’s going on here? Why are Republicans suddenly disavowing rhetoric that they’ve employed incessantly through the years? It’s because Donald Trump is suppressing the entire GOP vote.

The bottom is falling out of Trump’s support, with two polls (NBC/Wall Street Journal and Monmouth) coming out within the last 24 hours showing him down by double-digits to Clinton. His approval ratings, even among Republicans, are in the gutter. Everyone aside from the core deplorables fucking hates him, and for many, many good reasons.

The white nationalist deplorable base is about 40 percent of the GOP. That leaves 60 percent who are along for the ride because Clinton is the devil. Except … she’s looking better and better all the time. And even if she’s not, she won’t nuke the planet in a fit of pique. So what do they do on Election Day? I suspect turnout among this crowd, particularly Republican women, will be anemic at best.

But Republicans can at least depend on the deplorables to turn out, right? Those nutjobs HAVE to vote, don’t they?

There is legitimate fear that the “rigged” talk could lead to voter harassment at polling locations in communities of color. And you know some nuts with assault rifles will decide to “patrol” voting locations in some places. Brown people voting are always suspicious.

But the more significant damage is that which Trump is doing to himself.

In short, if your vote doesn’t matter because the system is rigged against you, why bother turning out?

The GOP reaction confirms this fear. If his “rigged” nonsense was helping Republicans, people like Ryan would shut their trap, just like they do when he says most of his crazy shit. But if an already dejected and demoralized Republican electorate suffers even further dropoff, the end result may be even better than our best-case scenarios.

So suddenly there isn’t a rigged vote! Well, at least not the kind that hurts Republicans.