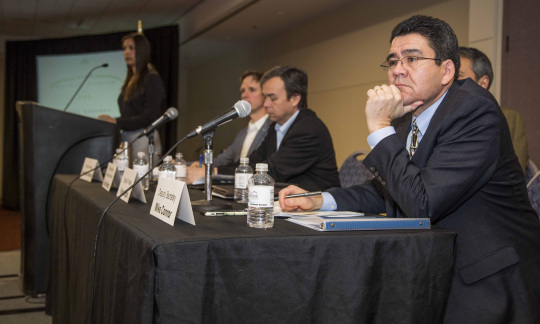 WASHINGTON –(ENEWSPF)–April 21, 2016.  Interior Deputy Secretary Michael L. Connor announced today that the Department of the Interior has signed agreements with the Agua Caliente Band of Cahuilla Indians of the Agua Caliente Indian Reservation in California, Nez Perce Tribe in Idaho, and the Yankton Sioux Tribe of South Dakota to conduct the Land Buy-Back Program for Tribal Nations (Buy-Back Program) in their communities.

“Together, through our nation-to-nation engagement with tribal governments, we are fulfilling the Obama administration’s steadfast commitment to strengthening tribal sovereignty,” said Deputy Secretary Connor. “Working collaboratively with tribal partners across the country, we have made tremendous strides in restoring nearly 1.5 million acres of land to tribes, and we look forward to continuing this effort with these three sovereign nations.”

The Buy-Back Program implements the land consolidation component of the Cobell Settlement, which provided $1.9 billion to purchase fractional interests in trust or restricted land from willing sellers at fair market value within 10 years. Consolidated interests are immediately restored to tribal trust ownership for uses benefiting the reservation community and tribal members.

Since it began making offers in December 2013, the Program has paid more than $740 million to individual landowners and restored the equivalent of nearly 1.5 million acres of land to tribal governments.

“The Agua Caliente Band of Cahuilla Indians is pleased to have entered into a memorandum of agreement with the Land Buy-Back Program for Tribal Nations,” said Agua Caliente Chairman Jeff L. Grubbe. “This creates opportunities for economic development through consolidating land ownership.”

“The Nez Perce Tribe is pleased to have entered into this cooperative agreement with the Buy Back Program to help address and reduce the problem of fractionated land ownership on the Nez Perce Reservation,” said Nez Perce Tribal Executive Committee Chairman Anthony Johnson. “The Tribe believes purchasing fractional interests in trust or restricted land on the Reservation will provide the Tribe and its members with increased economic development, home site development and agricultural opportunities.”

Yankton Sioux Tribal Chairman Robert Flying Hawk stated, “The Yankton Sioux Reservation sees its land base as one of its most important cultural resources as well as its economic engine. These consolidated tracts will open doors for housing, business and home sites and agricultural activities. The Buy-Back Program provides opportunities to willing sellers to gain an economic boost to their family income for purchases of goods and services that sometimes are just beyond their economic reach.”

There are approximately 245,000 owners of nearly three million fractional interests across Indian Country who are eligible to participate in the Buy-Back Program. The Department has identified 42 locations where land consolidation activities such as planning, outreach, mapping, mineral evaluations, appraisals or acquisitions are expected to take place through the middle of 2017. These communities represented 83 percent of all outstanding fractional interests across Indian Country.

In November 2015, the Program announced a Planning Initiative to assist in the development of its next implementation schedule for 2017 and beyond, with a submission deadline of March 11, 2016. The two-pronged Planning Initiative sought input from tribal governments and landowners who are interested in participating in the Program. The Program is now developing its next implementation schedule and plans to announce the locations that will be included in that schedule in mid-2016.