Australian, U.S. Ministers Work Together to Ensure Strength of Alliance

The United States does not take its alliance with Australia for granted, Defense Secretary Jim Mattis said here today.

The ministerial was serious business between friends. “We don’t take this alliance for granted, it takes work, and that’s what we’re here to do — work with you,” Mattis said at the meeting’s opening. “I would also note that we are united … in our resolve, even against an enemy that thinks by hurting us, they can scare us. Well, we don’t scare.”

“We’re here to work together in a manner that protects the freedom and the values that we share together,” he said, “and we’re committed to passing those freedoms onto the next generation intact.”

The discussions covered the gamut of relations from global engagements to regional issues to the threat of terrorism. “We meet a day after the shocking terrorist attacks in London,” Bishop said. “We stand resolute in our determination to fight terrorism and to fight the hideous ideology that gives rise to this brutal attacks on innocent civilians.”

The situation on the Korean peninsula and China’s efforts in the South China Sea were a particular focus. “We talked about the North’s weapons testing, and what we can do together to curb it behavior,” she said. 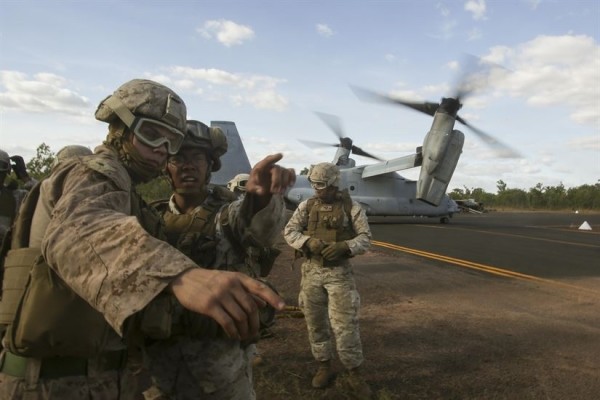 In his remarks, Tillerson said the two nations “speak with one voice” in calling on North Korea to end its nuclear and missile programs. “China and regional partners should also step up their efforts to help solve this security situation which threatens not just that region, but really the entire world,” he said.

The officials said the rules-based order that has been in place since World War II has provided the peace and stability needed for all countries in the region to advance economically. China’s actions in the South China Sea threaten that stability. They called on all nations in the region to settle territorial disputes peacefully and through international arbitration.

“We oppose China’s artificial island construction and their militarization of features in international waters,” Tillerson said. “China is a significant economic superpower and we desire a constructive relationship, but we cannot allow China to use its economic power to buy its way out of other problems.”

U.S. and Australian service members work side-by-side in combat zones around the world. They are working together in Afghanistan, Iraq and Syria where they join with coalition and indigenous forces to “rid the world of a scourge,” Bishop said. The officials said they discussed ways to make that fight more effective.

The Australia-U.S. alliance works so well because of the shared values of the two countries, Tillerson said. “Our shared values of freedom and democracy and rules-based order are long bonds that were formed in sacrifices we have made together over the past century through two world wars and we continue to stand shoulder-to-shoulder to uphold these values … as evidenced in this fight against terrorism.”

Australia hosts a number of American service members and the two countries spoke of the force posture initiatives in Northern Australia, Payne said. There are around 1,200 U.S. Marines based in Darwin on a rotational basis.

Mattis was obviously pleased with the discussions saying the alliance is solid and close and one “that has stood together through thick and thin and through generations,” he said. “I would also just say that Australia has proven to be a friend that tells us what we need to hear and not necessarily what we want to hear.”

The next Australia-U.S. ministerial will be in Washington next year.