Bernie’s back and judging by this fundraising haul, he’s just getting started:

The senator from Vermont raised just shy of $2 million in two days online this week for 13 like-minded U.S. Senate and House candidates, according to his campaign committee.

He tapped into the massive list he built during his unexpected presidential run:

The two-day take was $1.88 million, with more dollars continuing to come in. The biggest beneficiary, an aide said, was Deborah Ross, who’s mounted an unexpectedly strong challenge to Sen. Richard Burr (R-N.C.). About $300,000 flowed directly to her campaign.

Senator Sanders used House Speaker Paul Ryan’s own words to drive the massive fundraiser. In an email to supporters, Ryan cried that if they weren’t able to stop the Democrats, Bernie Sanders would have control of the Senate Budget Committee. Bernie pounced on the words of Paul Ryan, a man who’s been focused on polishing his own populist messages in preparation for an obvious presidential run of his own in 2020, all while refusing to retract his endorsement of the creepy, decidedly un-presidential Donald Trump.

“That sounds like a very good idea to me,” Sanders said. “It means that we can establish priorities for working people, and not just the billionaire class. What would be equally exciting is if the Democrats took back the House, and Congressman Ryan was no longer Speaker.” 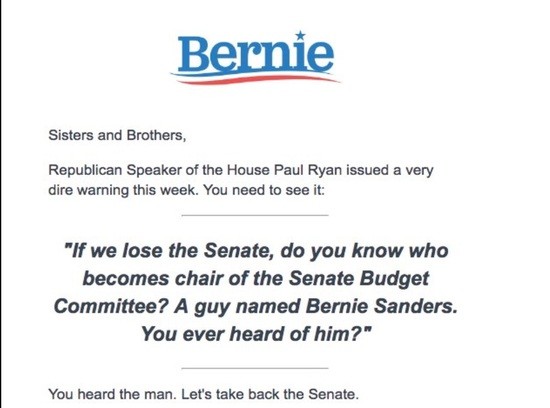 Bernie Sanders is ready to take the Senate

Can you imagine a President Clinton with a Democratic House and Senate? They would have the ability to really move the needle and make real change. And it would be our job to hold their feet to the progressive blue fire and demand it. Let’s make it happen. In Bernie Sanders’ words, “You heard the man. Let’s take back the Senate!”