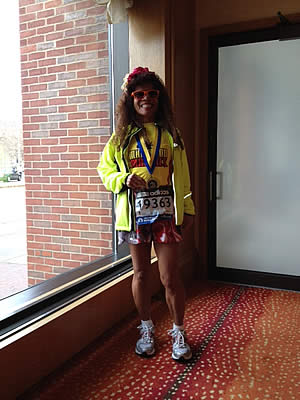 Boston, MA-(ENEWSPF)- Boonsom Hartman said she cried for hours after finishing the Boston Marathon today. Barely 3 minutes after she and husband Scott crossed the finish line, two bombs exploded, killing 3 and injuring more than 100. The 55-year-old Oak Forest resident ran a qualifying time for next year’s Boston Marathon, and plans to return next year to the running world’s most iconic trek.

She is well known in running circles, running marathons for the sheer joy of finishing, and likes to look good when crossing the finish line. Her husband Scott meets her at the 25th mile marker with her lipstick, which she pauses to apply, “I just go to finish, because everybody knows me. They just call me ‘Lipstick Lady.’ They just all cheer for me.”

Two of her favorite mottos are, “It’s better to look good than to feel good,” and, “To finish is to win.” Why? “Because when you look good, people know you. They don’t care how you feel, they remember how you look,” she says with a chuckle. “If you look good, people think you feel good. They always say, ‘Oh, look at the Lipstick Lady! She’s always happy!’”

Originally from Thailand, Hartman has run marathons in Canada, but prefers the United States, "I like this country so much.”

Monday in Boston she completed her 255th Marathon, but this one was different.

“I’m okay now. I couldn’t stop crying. It was just so sad. A beautiful day turned out to be a dark day.”

“Run Boston, qualify at Boston?” she said. “I was so happy.”

She said she was talking to a photojournalist after crossing the finish line. “I was so happy, so I asked him, ‘Can I give you a kiss on the cheek?’ So I gave him a kiss,” she said, laughing.

About two minutes later, while ‘high-fiving’ others who had crossed the finish line as well as volunteers, she heard the first explosion.

“We really hadn’t moved far past the finish line,” her husband Scott added. “There was the finish line, and then the media had a bridge across the top. We were just under that, a little past it, where the volunteers are at, we were right there. And then the first explosion went off. Everyone was kind of in shock. It was really loud. I said, ‘That is not good.’ And then 10 seconds later or so, another one went off a block farther away from us, and people panicked. People started running.”

The two of them were at a safe distance and began running away from the blasts with others.

“But you could see the white cloud,” Boonsom said. “It was like, ‘Oh my God.’ You see bad things in a movie, but this was the real thing, right there.” 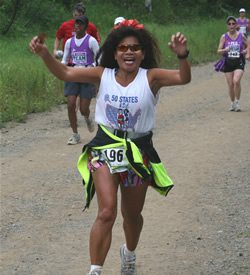 Boonsom Hartman in the home stretch of her 150th marathon. (Photo: Scott Hartman)

“It was very close,” Scott said.

They then went to the hotel where they were staying, but were unable to call out, “because they cut out the cell phones,” Boonsom said.

“We got one call out to our son,” Scott said, to let him know they were okay, but were unable to make any more calls. “After a while, we got people sending text messages, and we answered with text messages. We got the word out after a while that we were okay.”

The two said there were Park Forest members running with the Yankee Runners. Reports on the Running for Kicks Facebook page shows all local area runners are safe and accounted for.

And she plans to return and run Boston next year.

“After today, we don’t [want anything] to stop us,” Boonsom says. “After today we will come back, because when you stop doing something you love, you let them win.”