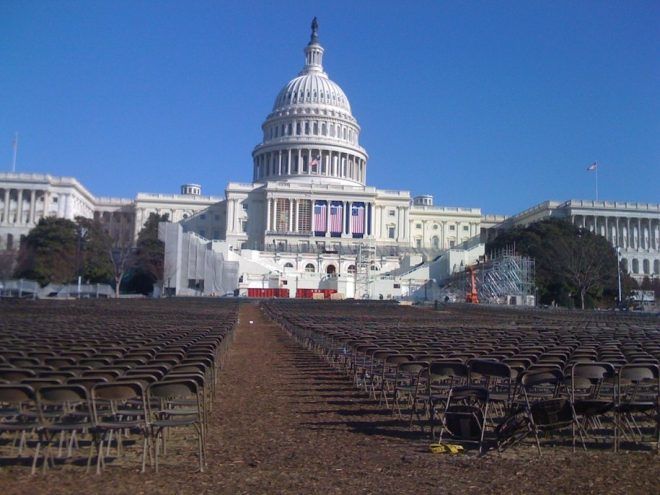 Will the Trump inauguration be the lowest attended ever?

The hugest. The best. The bigliest inauguration ever. Donald Trump took to Twitter in December to plead with his followers to attend the swearing-in ceremony to “set the all-time record!” Fat chance, lil’ hands. President Obama’s inauguration in 2008 set a record for the largest crowd in D.C. history with an estimated 1.8 million in attendance for the ceremony.

So, how are inauguration plans going? People Magazine interviewed retail workers and dress shop owners and it’s bad news for popular vote loser Donald Trump: his inauguration ceremony appears to be as unpopular as he is:

“We have not gotten a huge influx of traffic specifically related to shopping for inaugural dresses,” Anastasia Thomas, an employee at Betsy Fisher, a D.C. women’s wear shop, said.

In fact, Peter Marx, owner of Saks Jandel, a D.C. area boutique, told PEOPLE that there have been fewer people seeking inaugural gowns.

“Never ever has it been less for the inaugural.”

Ouch. It gets worse. Team Trump appears to still be struggling to add artists to the line-up. Sure, they booked national anthem singer Jackie Evancho, the teenage soprano who came in second during the 2010 season of America’s Got Talent. And they have an 80’s cover band and a number of D.C.-area wedding DJs. But several artists are reporting they are still being approached and the responses are likely to crush the fragile ego headed toward the White House:

@realDonaldTrump Your staff have asked me to sing at your inauguration, a simple Internet search would show I think you're a tyrant. Bye💩💩💩💩

Hahahahaha, I was just asked by a booking agent if I would consider doing at one of the inaugural balls for #trump… Hahahahaha, wait, Hahahaha, really? I guess I’d DJ at an inaugural ball if as payment #trump released his tax returns. Also I would probably play public enemy and stockhausen remixes to entertain the republicans. I’m still laughing. Hahahaha. So #trump what do you think, I DJ for you and you release your tax returns?

What are your plans for Inauguration Day? We’d recommend NOT tuning into the broadcast. Low ratings would surely deliver a blow. Stay tuned to Daily Kos for a day of resistance or tune into Facebook Live for a celebrity telethon to raise money for Planned Parenthood, the ACLU and more.