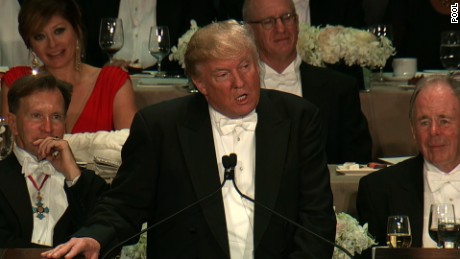 At the 21st Annual Al Smith Charity Dinner in New York,Republican presidential nominee Donald Trump roasted his opponent Hillary Clinton.  While Trump’s initial ‘jokes’ got some laughs, when his speech turned into another Trump political rally saying nasty things about Clinton the audience booed him several times.  Watch the uncomfortable looks on the faces of those sitting behind Trump while he gave his remarks.  They tell the whole story of how people are feeling about Trump’s inappropriate remarks.