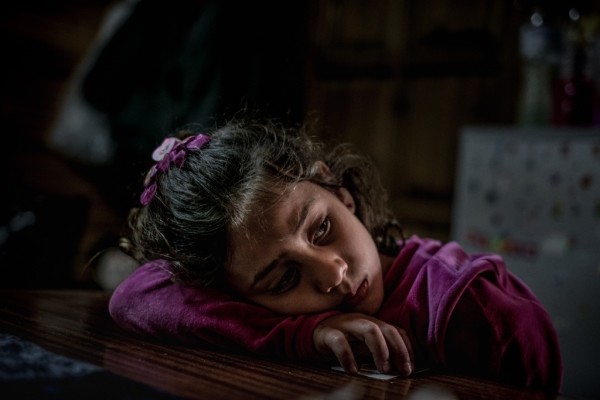 An 8 year-old refugee from the Syria, in her family’s shelter in Pikpa Village, an open refugee camp run by volunteers outside of Mytilini, Lesvos, Greece. Photo: UNICEF/Gilbertson VII Photo

GENEVA–(ENEWSPF)–4 May 2017 – Nearly 75,000 refugees and migrants, including an estimated 24,600 children, currently stranded in Greece, Bulgaria, Hungary and the Western Balkans are at risk of psychosocial distress caused by living in a protracted state of limbo, the United Nations Children’s Fund (UNICEF) warned today.

“We are seeing single mothers and children stranded in Greece, Serbia and Bulgaria who have not seen their husbands and fathers for months or even years,” said Afshan Khan, UNICEF Regional Director and Special Coordinator for the Refugee and Migrant Crisis in Europe.

“The family reunification process is slow, and its outcome uncertain and it is this uncertainty which can cause significant emotional distress and anxiety for children and families, setting them back for years to come,” she added.

In many cases, adult males are the first family members to make the trip to Europe, with the rest of the family following later.

Most stranded asylum seekers do not know whether or when they will be permitted to move forward. The situation is particularly acute for single mothers and children stuck in Greece or the Balkans waiting for reunification with family members in other EU countries.

But with the 2016 border closures and implementation of the EU-Turkey statement, other family members are being held up in transit countries from where they must apply for family reunification with their loved ones – a process that typically takes between 10 months and two years.

UNICEF and its partners in Greece are monitoring mental health and general depression among single mothers and children waiting for family reunification and providing psychosocial support.

“Keeping families together is the best way to ensure that children are protected, which is why the family reunification process for refugee and migrant children is so important,” said Ms. Khan. “With the number of those stranded continuing to rise, it is incumbent on member states to alleviate procedural bottlenecks so that families can get back together as quickly as possible.”

Most of the family reunification requests originate from children and separated family members stranded in Greece, but because of the caseload and involvement of destination countries, the process can be painstakingly slow.

In 2016, nearly 5,000 family reunification requests, out of which 700 from unaccompanied and separated children, were made from Greece, with only 1,107 successful applicants having reached their destination country by the end of the year.

Meanwhile, the number of refugees and migrants stranded in Greece, Hungary and the Western Balkans continues to grow – increasing by around 60 per cent over the past year from 47,000 in March 2016 to nearly 80,000 at the end of April.