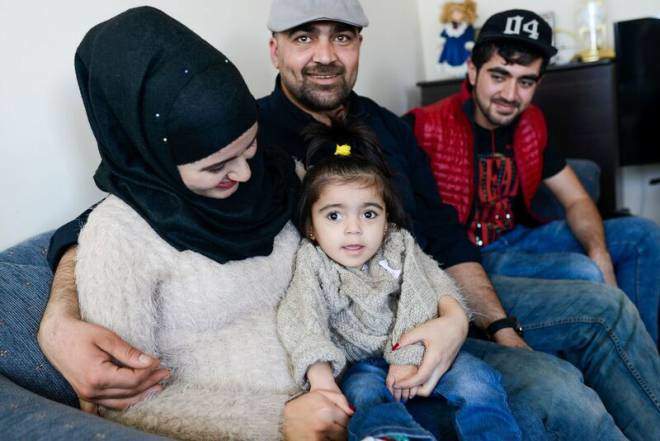 The Mahmut family from Syria began a new life in Ottawa in 2016, under Canada’s humanitarian programme to resettle 25,000 Syrian refugees. Photo: UNHCR/James Park

SYRIA–(ENEWSPF)–30 March 2017 – The world’s attention has moved away from Syria following the battle for Aleppo, despite the fact that the last few months have been “some of the worst” for civilians, the United Nations humanitarian chief today told the Security Council, reiterating calls for an end to the six year conflict.

“Violence continues to rear its ugly head in various parts of the country, even if it largely disappeared from the world’s TV screens since the evacuation of East Aleppo,” Under-Secretary-General for Humanitarian Affairs and Emergency Relief Coordinator Stephen O’Brien told the Council.

“The last months have been some of the worst yet for civilians inside Syria,” he added. “For Syria, that is saying something.”

Today’s humanitarian discussions in the Security Council come as political discussions are underway in Geneva, assisted by UN Special Envoy Staffan de Mistura. The latest discussions started on 23 March and will last through the week.

In today’s comments, Mr. O’Brien reiterated the importance of the intra-Syrian talks saying he “cannot emphasize enough how high the stakes are,” and voicing support for Mr. de Mistura.

Civilians threatened in Raqqa and Ghouta

As the conflict enters its seventh year, hundreds of civilians are believed to have been killed in the past weeks alone, with tens of thousands displaced and continued attacks on medical facilities and schools.

Mr. O’Brien expressed deep concern about the safety and protection of more than 400,000 civilians threatened by military operations in Raqqa governorate, which includes the de facto capital of the Islamic State of Iraq and the Levant (ISIL/Daesh).

As the fighting moves closer to Raqqa city, “concerns about the fate of civilians will only grow,” Mr. O’Brien said.

“I urge all parties to do everything in their power to protect and spare civilians from the effects of the hostilities as required, not just requested, under international humanitarian law.”

The UN and partners have been prepositioning stocks to enable a rapid response “access permitting.”

In addition, Mr. O’Brien also said he was extremely worried about the deteriorating security and humanitarian situation in the besieged parts of eastern Ghouta in Rural Damascus, where some 400,000 people are trapped by Government forces.

No UN humanitarian convoy was allowed access since October 2016 to eastern Ghouta, with some areas cut off since June prior.

In the past 10 days, Government forces have also reportedly prevented commercial trucks from entering, hiking up prices of staples and cutting informal trade.

“This tightening of the siege has started a time bomb for the people of eastern Ghouta,” Mr. O’Brien said, calling for immediate access.

Delivery of humanitarian aid has been difficult throughout the country, the senior UN official lamented. He said that despite hopes that 2017 would lead to greater entry to besieged and hard-to-reach areas, “the bottom line is, however, that with a quarter of the year gone, our current levels of access are no better than this time last year.”

His comments come just days before an international pledging conference is due to be held in Brussels on 5 April. Entitled “Supporting the future of Syria and the region”, the conference is co-chaired by the UN.

Mr. O’Brien thanked donors for going “above and beyond” this year, but stressed the critical needs in Syria and the neighbouring countries.

The UN and its humanitarian partners have released the 2017 Humanitarian Response Plan for Syria which outlines requirements of some $3.4 billion to undertake a comprehensive humanitarian response in Syria, including saving lives, enhancing protection and building people’s resilience.

Urging Governments to make good on promises of homes

Meanwhile, new figures show that fewer Syrian refugees were resettled in the past year than originally planned, even as the total number of people fleeing the violence surpasses five million.

“Despite the call during that meeting in Geneva on 30 March 2016 to resettle and facilitate pathways for 500,000 refugees, to date 250,000 places have been made available,” said Filippo Grandi, the UN High Commissioner for Refugees. His remarks reference the High-level Meeting on Syria, held in March 2016, where participating Governments agreed to resettle 10 per cent of all Syrian refugees by 2018.

UNHCR, the agency that Mr. Grandi heads, said that while 250,000 locations have been pledged, some have not yet been made available for the people who need them.

Mr. Grandi called on Governments to make good on their promises to find new homes for the most vulnerable refugees: “We still have a long road to travel in expanding resettlement and the number and range of complementary pathways available for refugees.”