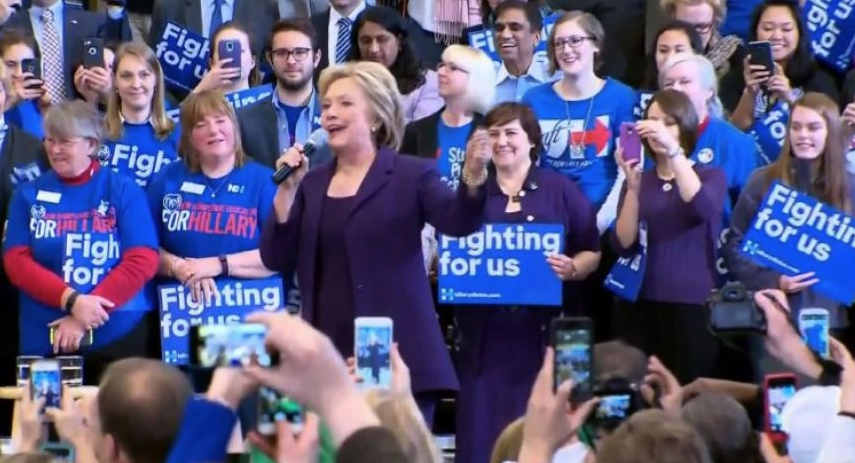 Finally, finally, maybe the media is beginning to look at Hillary supporters. Last night on Chris Hayes he actually spent a couple of minutes talking about how all the media attention went to the disgruntled white male voters and their excitement about Trump, or to the young enthusiastic Bernie supporters even though Hillary had more people voting for her than either of them. Hillary supporters have been neglected, ignored, denigrated, and treated with contempt. It’s been assumed throughout the campaign that people who support Hillary are resigned, not excited.

Facts don’t matter in this assumption: Back in March, the Gallup Poll showed Hillary with a greater proportion of extremely enthusiastic and very enthusiastic supporters than Bernie:

But the meme continued. Just google “Sanders Clinton enthusiasm,” and the first 5 listings are about Hillary suffering from an “enthusiasm gap.”

Reporters frequently interviewed wildly excited Trump supporters and energized Bernie supporters but instead of talking to similar types of Hillary supporters, they highlighted desultory support from unenthusiastic voters, voters who didn’t like anyone and were voting for Hillary because everyone else was worse.

Yet there were plenty of excited people they could have interviewed:

According to The Green Papers, Clinton won 16.8 million votes to 13.2 million for Sanders, or about 55 percent of the vote

Given the Gallup poll pictured above showing 54% of Democrats or Democratic-leaners saying they were extremely or very enthusiastic about Hillary, there were about 9 million people who could have given reporters a very different picture of the level of enthusiasm for Hillary.

As a woman of Hillary’s age, I think a whole hell of a lot of this is the invisibility of middle-aged and older women. We are discounted by everyone (including by ourselves), even though we are the bedrock of America. We are the ones who vote in largest proportion, who power the PTA committees, the community organizations, the ones who volunteer for the everyday (not just the crises) needs, the ones who make meals for the bereaved and desolated, the ones who buy groceries for the home-bound neighbors, the ones who do all this while working at jobs and raising children.

As Alexandria Petri said in the WaPo today:

The nasty women have a great deal to do ….. But that is all right. They know how to get things done.

Our enthusiasm for Hillary never ever counted. We weren’t the bashing screaming armed white men. We weren’t the young wildly cheering rally-attenders. We’re the ones who keep going no matter what and see the best of ourselves in Hillary.

Talk to us. It’s past time.