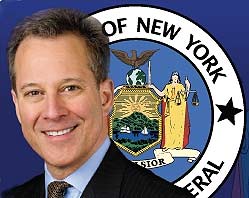 New Research Shows That 74% Of All Guns Recovered By Law Enforcement Originated Out-of-State; Nearly Nine Out Of Ten (86%) Of Recovered Handguns — The Weapon Of Choice For Violent Criminals — Come From Out-Of-State

The ground-breaking analysis shows that 74 percent of all crime guns recovered by law enforcement originated out-of-state, and nearly nine out of ten (86 percent) of recovered handguns come from out-of-state.

“The data makes one thing abundantly clear: New York’s strong gun laws are being undermined at every turn by lax laws in other states,” said Attorney General Schneiderman. “Even as we work to make our streets safer, the illegal guns most often used in violent crimes continue to pour into our state. In fact, three-out-of-four guns used in New York crimes come from out-of-state. When you look at the illegal crime gun problem, it’s the handgun that’s killing people every day – and 86% of recovered handguns come from out-of-state, underscoring the problem New York faces. It’s time for the federal government – and other states – to take common sense measures and ensure weak gun laws won’t continue to take the lives of New Yorkers.”

“There’s no question:  one of the biggest challenges this department faces are guns, and in particular handguns, that are trafficked into New York from out-of-state,” said NYPD Commissioner James O’Neill. “Attorney General Schneiderman’s report and gun tracing tool provide invaluable insight into where these guns come from and how law enforcement and lawmakers can act to protect New Yorkers.”

“I am grateful to the Attorney General for adding this report and supplying this webinar to our department,” said Suffolk County Police Commissioner Timothy D. Sini. “This department is committed to continue to lower crime in Suffolk County and take illegal guns off the streets.  This new, comprehensive database will help our department better track where these weapons are originating and how to combat the problem. Another innovative and valuable tool we will undoubtedly use. ”

Manhattan District Attorney Cyrus R. Vance, Jr., said, “These findings clearly show that crime guns from ‘Iron Pipeline’ states are flooding our streets and getting into the hands of criminals at an astonishing rate. I commend Attorney General Schneiderman for this important undertaking, which underscores the challenges local law enforcement faces in the fight against gun violence. I urge the passage of the Attorney General’s common-sense recommendations, and thank him for supporting the Gun Kingpin Bill I proposed earlier this year, which will help prosecutors put wholesale illegal firearms dealers out of business in New York State. Additionally, this report serves as a persuasive call for federal action – no matter how much we strengthen New York’s gun laws, we are fighting an uphill battle in the absence of national reform.”

The Attorney General’s office is the first statewide law enforcement agency to obtain and analyze such comprehensive crime gun data provided by the federal Bureau of Alcohol, Tobacco, Firearms, and Explosives (ATF).

The analysis showed sweeping and important trends in gun recoveries, particularly in regards to how out-of-state guns are flooding into New York from the “Iron Pipeline” — states with lax guns laws along the I-95 corridor, namely Pennsylvania, Virginia, North Carolina, South Carolina, Georgia, and Florida. These findings offer significant policy implications and context for state and national leaders striving to reduce gun trafficking and violence.

“Attorney General Schneiderman’s new report makes it clear that we urgently need to make gun trafficking a federal crime,” said U.S. Senator Kirsten Gillibrand (D-NY). “Gun trafficking is recognized all around, by both parties, as a major source of fuel for American gun violence, yet there is still no federal law that prevents someone from crossing state lines with a truckload of guns and selling them to criminals in a parking lot. As long as gun trafficking is not a federal crime, it will continue to be shamefully easy for criminals to get their hands on these weapons, and law enforcement won’t have the tools they need to prosecute traffickers and remove these illegal guns from the black market. My gun trafficking bill is one of the only gun bills that has bipartisan support – and this is despite the efforts of the gun industry and its powerful lobby to protect their own profits and stop us. The American people are demanding that Congress respond to the gun violence crisis, and my bipartisan gun trafficking bill is an important part of that response.”

“Each trace represents the life of a crime gun, and together these data tell a crucial story – both about how guns make their way to criminals, and about how law enforcement can crack down on gun trafficking,” said John Feinblatt, President, Everytown for Gun Safety. “Communities across the state are devastated by handguns that come up the Iron Pipeline from states with weak laws. The Attorney General’s report shows the power of bringing data together, and we hope that law enforcement elsewhere take note.”

“This report provides an unprecedented look at the flow of illegal guns into New York and offers a stark illustration of the challenge faced by states like New York whose strong gun laws are undermined by a lax approach to this issue taken by other states,” said Chelsea Parsons, Vice President of Guns & Crime Policy, Center for American Progress. “This is the most comprehensive analysis of statewide crime gun trace data to date and provides invaluable information to law enforcement, policymakers, and community stakeholders seeking to prevent gun violence across the state. We are hopeful that other states will follow the example of this report and conduct a similar analysis to continue shining a light on the illegal trafficking networks currently operating in this country.”

“I applaud Attorney General Eric Schneiderman and his office for the tremendous, groundbreaking work that went into this report and the online tools that come with it,” said Assemblymember Brian Kavanagh, who chairs American State Legislators for Gun Violence Prevention, a 50-state coalition, and co-chairs its New York affiliate. “The gun industry and its allies often attempt to block research and data-gathering on gun violence, but analysis like this can both demonstrate the life-saving effectiveness of sensible gun laws, and also help us prevent gun crimes and solve them when they occur. I believe that New York’s approach can serve as a model for federal and state action that should be emulated across the country.”

“This important new report gives our lawmakers even more evidence that when enacted, smart, responsible gun laws work: they reduce crime and protect communities. As Attorney General Schneiderman has shown with this report, the Washington gun lobby’s oft-repeated canard that gun laws are ineffective is just that. This report also shows the need for our lawmakers in Washington to do more to combat the illegal gun trade, and the consequences of making it easy for criminals to traffic firearms from a state with weak gun laws into one with stronger laws. Gabby and I applaud Attorney General Schneiderman for his continued leadership on preventing gun violence,” said Navy combat veteran and retired NASA astronaut Captain Mark Kelly, the Co-Founder of Americans for Responsible Solutions.

As part of today’s announcement, Attorney General Schneiderman also released the Tracing Analytics Platform, a powerful and publicly available online tool that empowers members of the public to dive into the data themselves, analyzing gun trends by region, year, gun type, time-to-crime, and other factors. The tool’s interactive features also enable New York law enforcement, lawmakers, and residents to explore the gun trafficking patterns occurring in their individual communities.

The findings in the new report include:

In addition to unprecedented data on trafficking patterns, the report also provides key policy recommendations to deal with the trafficking challenges faced by New York State, including:

Special thanks to Deputy Attorney General Peri Kadanoff, Chief of the Organized Crime Task Force, the Executive Division’s Research and Analytics Department, and the OAG Web Team for their assistance preparing the report. Additional thanks to ATF’s New York Field Office and National Tracing Center for their assistance in obtaining the data used in this report.