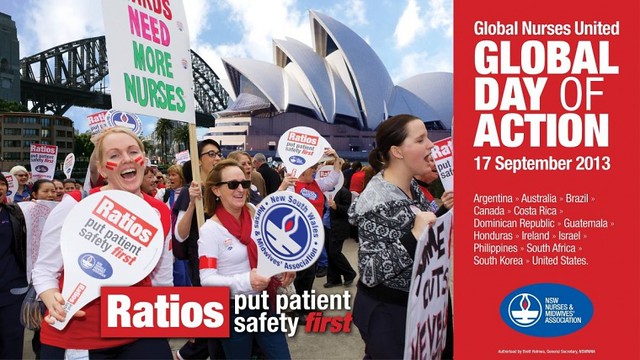 Washington, DC–(ENEWSPF)–September 17, 2013.  Leading nurse and healthcare union organizations in 13 countries in the Americas, Africa, Asia, Australia, and Europe are holding coordinated actions Tuesday, September 17 to escalate the call to stop the harmful effects of austerity measures, privatization, and cuts in health care services that they say are putting people and communities at risk, and call for safer nursing care.

Many of the actions – including a major march in New York City that coincides with the opening of the United Nations General Assembly and the second anniversary of the Occupy Wall Street movement – will also call for a tax on financial speculation, also known as the Robin Hood tax, to raise hundreds of billions of dollars in needed revenue for economic recovery. For more on the New York action:

The international actions are the first fruit of the June founding of Global Nurses United that brought together leaders of the organizations who pledged to work together on these issues, as well as working collectively together to guarantee the highest standards of universal healthcare as a human right for all, to secure safe patient care, especially with safe nurse-to-patient ratios, and safe health care workplaces. 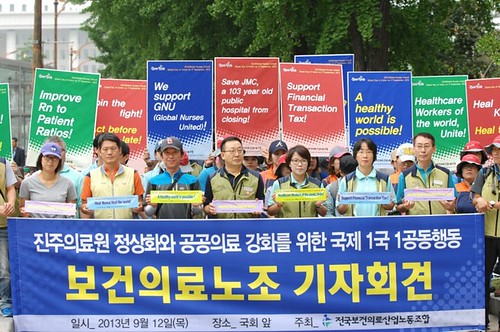 Nurses, allies rally in Seoul, South Korea Sept. 12 against austerity, and for a Robin Hood tax

South Korea: On September 12, more than 1,000 nurses and allies, organized by KHMU (Korean Health and Medical Workers Union), marched on the Korean National Assembly in Seoul to demand an end to austerity, save the Jin Ju Medical Center, and pass the Robin Hood Tax.

Argentina: FESPROSA (Federación Sindical de Profesionales de la Salud de laRepública Argentina) will hold a press conference on the 17th to demand full funding of public health care, respect for the rights of nurses and other health care workers, and in support of the Robin Hood Tax.

Australia—Queensland:  The QNU (Queensland Nurses Union) will hold workplace actions at hospitals across the state on the 17th linking to the global demands.  They will also publish ads in newspapers in Queensland on the vital role of nurses and midwives in providing universal health care, and hold a tree-planting ceremony at the union’s Brisbane office to mark the first GNU day of action.

Brazil: FNE (Federação Nacional dos Enfermeiros) will be demanding of the Minister of Health and the President a vote on the Draft Law 2295/00 which regulates the working hours of all nursing professionals at 30 hours a week.  The union’s state affiliates will concurrently call on state governments to strengthen the national action. They are also launching the National Forum of Nursing Organizations to broaden the debate on issues related to nurses’ working conditions and professional status.

Canada: CFNU (Canadian Federation of Nurses Unions) and United Nurses of Alberta will hold a rally in Calgary focused on stopping attempts by the government to impose cuts in the health care system.

Costa Rica:  ANPE (Associacion Nacional de Profesionalies en Enfermeria) will hold a rally on September 17 at their labor tribunal to demand nurses’ rights to collectively bargain and to strike and will then deliver a demand to the government to fully fund public health care for the people of Costa Rica. 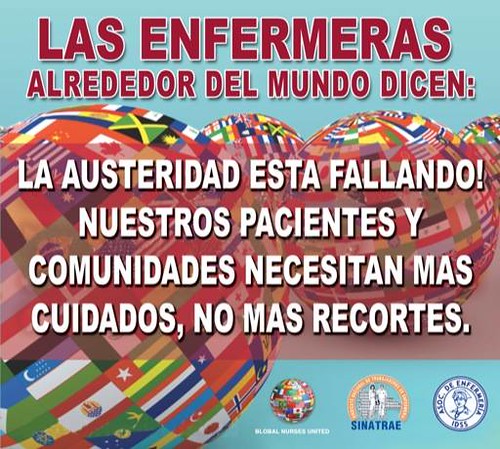 Call for action Sept. 17 from the Dominican Republic

Dominican Republic: SINATRAE will be staging actions in Santo Domingo and Santiago focused on demands on the government to increase the budget for public health and respect the dignity of nurses through collective bargaining agreements.

Guatemala: SNTSG (Sindicato Nacional de los Trabadores de Salud de Guatemala) will be staging mobilizations around the country, with the biggest in Guatemala City, making a demand for a Robin Hood Tax and against austerity.

Honduras: ANEEAH (Asociation Nacional de Enfermeras/os Auxiliares de Honduras) is planning picket lines at every hospital in the country and will hold a major mobilization/picket line in front of the government house in Tegucigalpa. The demands on the government include improve patient care in the public hospitals, hire more nurses, fully fund the nurses’ pensions and pay their wages.

Ireland: INMO (Irish Nurses and Midwives Organisation) will issue a press statement focused on stopping austerity and linking it to GNU global day of action.

Philippines: The Alliance of Health Workers, together with allied health organizations will have a mass action in the morning of September 17, in front of the WHO Western Pacific Regional Headquarters in Manila to demand health care for all.

South Africa: DENOSA (Democratic Nursing Organisation of South Africa) has launched a petition drive against austerity measures and in support of the Robin Hood Tax with plans to present the petition to President Zuma.  In addition, DENOSA nurses marched with allies to the office of the Ministry of Health in the Eastern Cape province last week demanding solutions to the chronic health problems facing the province.

United States: NNU (National Nurses United) is working with the Robin Hood Tax campaign to hold a major demonstration in New York City demanding an end to austerity policies and passage of the Robin Hood Tax, starting at the Dag Hammarskjöld Plaza across the street from the United Nations.  The march from the UN to the world headquarters of JP Morgan Chase, one of the largest investment banks in the world, then to the New York City Metropolitan Transit Authority (which has been cutting service and cutting workers), then to the State University of New York to demand that they stop closing hospitals in the city, and concluding in Bryant Park.  More than 40 unions, community groups, HIV-AIDS groups, student groups, and others have endorsed the march and will be mobilizing people to attend.

“This great series of actions represents the dedication of nurses and other healthcare workers worldwide uniting to protect patients and the health of our nations,” said NNU Co-President Karen Higgins, RN. “GNU was founded as an activist organization, with the view that our collective movement was critical to challenge the governments and global institutions that promote austerity and cuts in services – and to push for the changes needed for all our communities and nations, such as the Robin Hood tax to raise the revenues to meet human needs.”

“Nurses and midwives around the world face similar challenges,” including “the struggle for safe staffing levels and safe workplaces” and “threats to universal healthcare,” said the Queensland (Australia) Nurses Union in a full page ad running Sept. 17 in Queensland’s largest newspaper, The Courier Mail.

South Africa’s DENOSA noted the convergence of the global actions with the United Nations review of progress under the agency’s Millennium Development Goals.  “We call upon the labor movement and world citizens globally to support our petition against austerity measures and for the Robin Hood Tax (also known as Financial Transaction Tax). There is a disturbing resource gap to see to it that the realization of the Millennium Development Goals beyond the deadline of 2015 succeeds,” said  Nombuso Madonda, International Relations Coordinator at DENOSA.