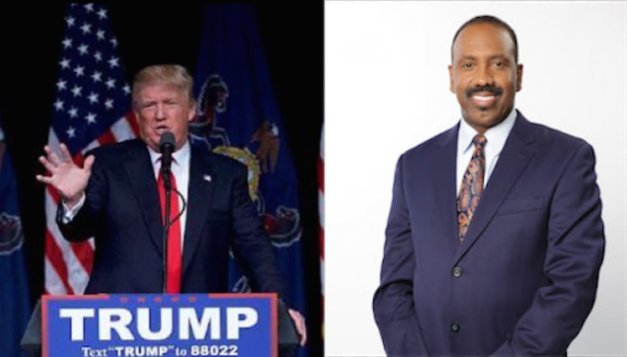 Wow. From The New York Times:

Instead of speaking to the congregation at Great Faith Ministries International, Mr. Trump will be interviewed by its pastor in a session that will be closed to the public and news media, with questions submitted in advance. And instead of letting Mr. Trump be his freewheeling self, his campaign has prepared lengthy answers for the submitted questions, consulting black Republicans to make sure he says the right things.

When asked about his vision for black Americans, the script suggests that Mr. Trump stay positive, advising that he use lines such as “If we are to make America great again, we must reduce, rather than highlight, issues of race in this country” and “I want to make race disappear as a factor in government and governance.”

To a question submitted by Bishop (Wayne T.) Jackson about whether his campaign is racist, the script suggests that Mr. Trump avoid repeating the word, and instead speak about improving education and getting people off welfare and back to work. “The proof, as they say, will be in the pudding,” Mr. Trump is advised to say. “Coming into a community is meaningless unless we offer an alternative to the horrible progressive agenda that has perpetuated a permanent underclass in America.”

To the first question, “Are you a Christian and do you believe the Bible is an inspired word of God?” the scriptwriters have a response they hope will keep Mr. Trump from repeating previous stumbles when asked about his faith.

“As I went through my life, things got busy with business, but my family kept me grounded to the truth and the word of God,” the script has Mr. Trump saying. “I treasure my relationship with my family, and through them, I have a strong faith enriched by an ever-wonderful God.”

While questions during a campaign appearance such as this are often pre-written, it is highly unusual for a candidate’s responses to be scripted as well. Though, I suppose when one is dealing with the racist dumpster fire that is Donald Trump, this shouldn’t come as a surprise.