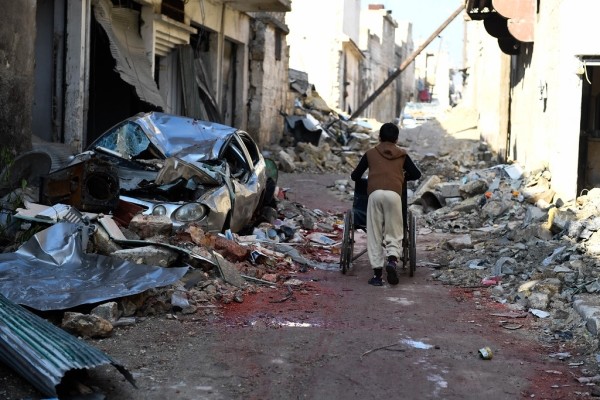 A boy pulls a wheelchair along a debris strewn street in Al-Mashatiyeh neighbourhood of eastern Aleppo, Syria. Photo: UNHCR/Bassam Diab

GENEVA–(ENEWSPF)–18 April 2017 – The United Nations human rights office today expressed great concern about the safety of civilians being evacuated in Syria, saying a weekend attack on a convoy near Aleppo likely amounts to a war crime and the situation in Syria should be referred to the International Criminal Court.

“ We add our voice to the condemnation of the attack near Rashideen near western rural Aleppo Governorate that hit a convoy carrying people from the besieged Syrian towns of Fuha and Kefraya to Government-controlled areas, killing dozens of people,” Rupert Colville, a spokesperson for the Office of the UN High Commissioner for Human Rights (OHCHR), told journalists in Geneva.

“It is an attack which likely amounts to a war crime,” he stressed.

OHCHR is calling on all parties to ensure the safety and protection of people being evacuated.

“We reiterate the High Commissioner’s call for accountability and the need to refer the situation in Syria to the International Criminal Court,” Mr. Colville said.

He noted that while OHCHR cannot confirm how the attack was carried out or those responsible, footage seen by the Office “showed children gathering around a person giving out sweets just prior to the explosion.”

Hospitals in Aleppo city received the bodies of 96 civilians, including 67 children, Mr. Colville confirmed, adding that the number of children reportedly killed is “particularly abhorrent.”

In addition to the people killed, OHCHR has confirmed that some of the injured civilians remain missing.

“Some are believed to have been taken by armed opposition groups to opposition-controlled hospitals in Idleb Governorate,” he said. “Due to their perceived sympathies for the Government of Syria, their families are concerned for their safety.”

The groups are among those being evacuated from Fuha and Kerfraya as part of the “Four Towns Agreement” negotiated by Qatar and Iran. The two other towns are Madaya and Zabadani.

“These people had been living under incessant shelling for more than two years, with little food or medical supplies, and under the constant fear of attack by armed groups,” Mr. Colville said.

Today’s condemnation echoes senior UN officials, including the Organization’s top humanitarian official and the head of the UN Children’s Fund (UNICEF), who have expressed “horror” at the attack on civilians evacuated from the besieged towns.