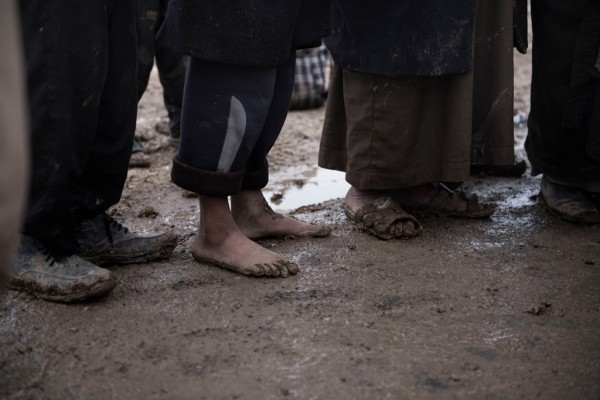 A child stands barefoot alongside other children, after they fled with their families from fighting between ISF and ISIL in an area west of Mosul, Iraq. Many of those fleeing are using the cover of night to evade ISIL snipers. Photo: UNICEF/Romenzi

GENEVA–(ENEWSPF)–8 June 2017 – Noting “credible” reports that Islamic State in Iraq and the Levant (ISIL/Da’esh) fighters killed more than 231 civilians, including women and children, attempting to flee western Mosul over the past two weeks, the United Nations human rights arm underscored that attacks on civilians could amount to war crimes.

In a news release today, the Office of the UN High Commissioner for Human Rights (OHCHR) – which has been documenting alleged human rights violations and abuses since the start of the military operations to retake Mosul – said that recent reports suggest a “significant escalation” in atrocities against civilians.

“Shooting children as they try to run to safety with their families – there are no words of condemnation strong enough for such despicable acts,” Zeid Ra’ad Al Hussein, the UN High Commissioner for Human Rights, said in the release.

“I call on the Iraqi authorities to ensure that those who are responsible for these horrors are held accountable and brought to justice in line with international human rights laws and standards.”

In the most gruesome incident, last Thursday (1 June), ISIL reportedly shot and killed at least 163 civilians, including women, men and children, next to a Pepsi factory in the in al-Shifa neighbourhood. Their bodies were reportedly left on the street for several days following the killings.

An undetermined number of civilians were also reported missing. Those killed and missing were fleeing clashes between ISIL and the Iraqi Security Forces (ISF).

In the same neighbourhood, at least 27 people, including 14 women and five children were reportedly killed by ISIL on 26 May, and at least 41 others on 3 June.

Further in the release, referring to reports of civilian casualties due to recent air strikes in an ISIL-held area of western Mosul, OHCHR called on the ISF and their coalition partners to ensure that their operations comply fully with international humanitarian law and that all possible measures are taken to avoid the loss of civilian lives.

An air strike on 31 May in Zanjilly (an ISIL-held area of western Mosul) reportedly resulted between 50 and 80 civilian deaths, the news release added, noting that High Commissioner Zeid “urged Iraqi authorities to ensure that any allegations of human rights violations committed by the ISF are also fully investigated and those responsible held accountable.”