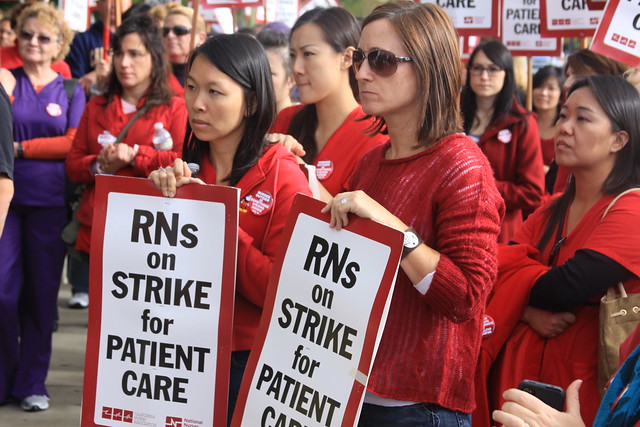 “Sutter has forced us to strike again by immorally proposing to strip us of our sick leave, healthcare, and much of what we have worked hard for over the years,” said Alta Bates Summit Oakland RN Paula Lynn. “Sutter must stop its unfair treatment of nurses and negotiate a fair contract.”

Sutter corporate officials, taking an especially hard line in the Sutter East Bay Region, continue to demand some 100 sweeping cuts in patient care protections and nurses’ contract standards – despite being one of the wealthiest hospital chains in the United States. In contrast, Sutter hospitals in San Mateo, Sonoma, and Lake counties have broken the pattern and called off their war on nurses and patients by withdrawing their unwarranted concession demands, which led to quick contract settlements at those facilities.

But at Alta Bates Summit Medical Center hospitals in Berkeley and Oakland, for example, management continues to insist on elimination of paid sick leave, effectively forcing nurses to work when ill, exposing already frail and vulnerable patients to further infection.

East Bay Region executives are also demanding eliminating all health coverage for nurses and techs who work fewer than 30 hours per work – which would end health benefits entirely for 435 RNs and 31 techs at Alta Bates and 100 RNs at Eden and San Leandro, a proposal nurses call unconscionable and immoral.

In San Jose, the key issues are hospital management’s rejection of the nurses’ proposals for improvements in safe staffing and other patient care conditions, including sufficient staff for incoming patients and designated lift teams to safely move and transport patients to reduce accidents and injuries to nurses and patients alike. Additionally, the nurses are protesting employer demands to eliminate guaranteed pensions for RNs as well as major cuts in health, dental, and vision care benefits.

“Nurses have made the difficult decision to strike for one day for the future of our hospital and our growing community,” said Amy Santos, an RN in the telemetry care unit at Regional Medical Center, HCA. “Like so many of my colleagues, I have raised a family here in San Jose.  We need to have patient care protections such as safe patient lifting, and appropriate staffing at all times as patients are admitted and discharged throughout the day. That is not the case on the majority of our units at this time.”

“Our concern for our patients and for the future of our hospitals is at the heart of this strike,” said Lindy Herrera, who has been a neonatal intensive care RN at Good Samaritan Hospital, HCA for 24 years.  “Undercutting our ability to compete for the best-qualified nurses by driving down our benefits and rejecting our attempts to enhance staffing is unwarranted.  Our contract demands take into account the financial viability of our hospitals and the chain we work for and ensure we can retain and recruit the most qualified nurses to our hospital.”

Alta Bates Berkeley RN Rochelle Pardue-Okimoto explains, “We do not want to strike and have offered to settle with our current contract, but Sutter refuses, appearing more interested in union busting than negotiating.  As a nurse, I will never give up my union rights as that gives me a voice in the hospital and gives the patient an advocate.  My special interest is not making money, it is delivering quality care to my patients.”

“Sutter Solano nurses must strike because Sutter has not demonstrated any economic justification for the sacrifices they want nurses to make,” said Janet Braillard, Sutter Solano RN. “While the CEOs continue to enrich themselves by millions in salaries, we are only asking for fairness.”

Sutter has rolled up more than $4.2 billion in profits since 2005 and pays 28 top executives more than $1 million in compensation, by far the most lavish spending on executives among all California hospital systems. Sutter CEO Pat Fry received more than $5.2 million in total compensation in 2011, according to Sutter’s IRS filings, an increase of 183 percent in just four years. Sutter East Bay Region President David Bradley’s 2011 compensation exceeded $1.6 million, a whopping 216 percent increase in four years.