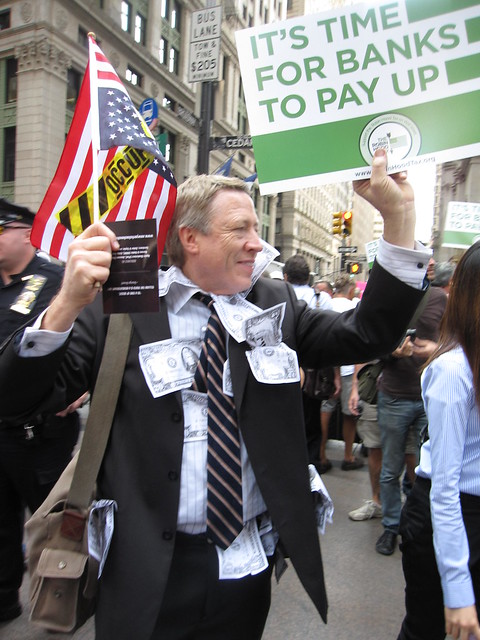 On Tuesday, October 2, the eve of the fourth anniversary of the Troubled Asset Relief Program (TARP) — under which hundreds of billions of tax dollars were handed over to financial institutions deemed “too big to fail”– the Robin Hood Tax Campaign and its allies in labor, health, religious and consumer organizations, will visit Congressional field offices in seven states to seek pledges of support for the “Inclusive Prosperity Act,” H.R. 6411.   The bill, introduced in Congress by Rep. Keith Ellison (D-MN), is a sales tax on Wall Street speculation and would raise up to $350 billion in revenue annually to be used to rebuild Main Street communities as well as to fund international health, sustainable prosperity and environmental programs.

“The American public provided hundreds of billions to bailout Wall Street during the global fiscal crisis yet bore the brunt of the crisis with lost jobs and reduced household wealth,” said Rep. Ellison in a statement issued September 18, the day the legislation was introduced, “A financial transaction tax protects our financial markets from speculation and provides the revenue needed to invest in the education, health and communities of the American people.”

H.R. 6411 embodies the Robin Hood Tax, a 0.5% tax on the trading of stocks and lesser rates on trading in bonds, derivatives and currencies.  It marks the return of a sales tax on financial transactions in place during the years 1914 to 1966 and targets the high-risk, high-frequency trading that dominates the markets in the U.S. today.  This trading has been tied to market instability, including spikes in the prices of food and fuel.  Some form of the financial tax is in place today in more than 40 countries.

“Four years after TARP, Wall Street’s wealth is secure and yet millions of American families are still reeling from the effects of financial wheeling and dealing,” said Jean Ross, RN and co-president of National Nurses United, a founder of the Robin Hood Tax Campaign in the U.S.  “The Inclusive Prosperity Act taxes those who can afford it, the ones who were protected by our tax dollars.  They are past due in paying for their damage to Main Street.  If we make H.R. 6411 law, we start the healing process and turn this country around.”

Robin Hood Tax Campaigners, wearing their signature hats, will present out-sized calendars and pledge cards to the field offices to demand that the highest priority be given passage of this law.   More than 100 organizations in the U.S. have endorsed the Robin Hood Tax, with support from scores of economists, as well.