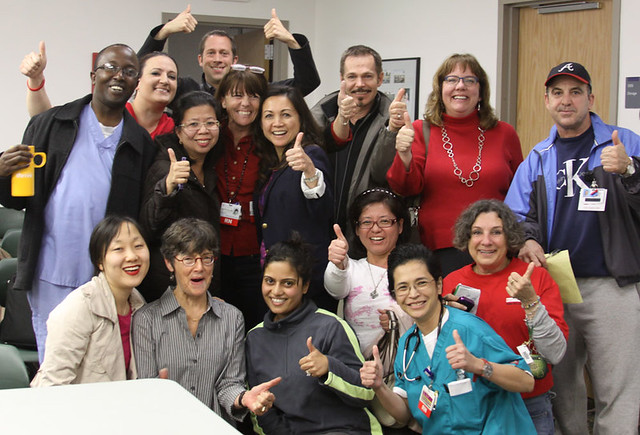 In a hard fought organizing campaign, RNs at Sutter Tracy Community Hospital in Northern California voted to affiliate with the California Nurses Association, the state’s largest organization of RNs.

In a secret ballot election overseen by the National Labor Relations Board, Sutter Tracy RNs voted 83 to 70 to join CNA. Overall, CNA now represents 6,200 RNs at 16 Sutter facilities, one of the biggest and wealthiest hospital chains in California.
Sutter officials responded to RNs exercising their democratic right to gain a voice in patient care decisions with an aggressive anti-union campaign of surveillance and harassment.

But according to many nurses who voted to join CNA, those tactics backfired, underscoring the need for union representation.

After hugging fellow nurses following the final vote count, Clarissa Concepcion, RN who works in the medical surgical unit said, “This is a dream come true. It’s been very oppressive since 2005 when Sutter came in to this hospital. Now with the union representing us there will be democracy and equality in our workplace.”

The key issues that galvanized the RNs to organize centered on patient protection provisions that already exist in CNA-represented Sutter hospitals. These include meal and break relief nurse positions to ensure that patients are safely cared for at all times, bonus pay for required certification, and enhanced sick leave, among other issues.

“Sutter Tracy has made tens of million in profits and the CEO received a 58 percent raise while making cuts to care and the nurses ability to be effective patient advocates,” said Dotty Nygard an emergency room RN. “Nurses stood up for our patients and our profession, and we won.  We can now share in the vision of a better and healthier future for our patients, our profession and our community with CNA representation.”