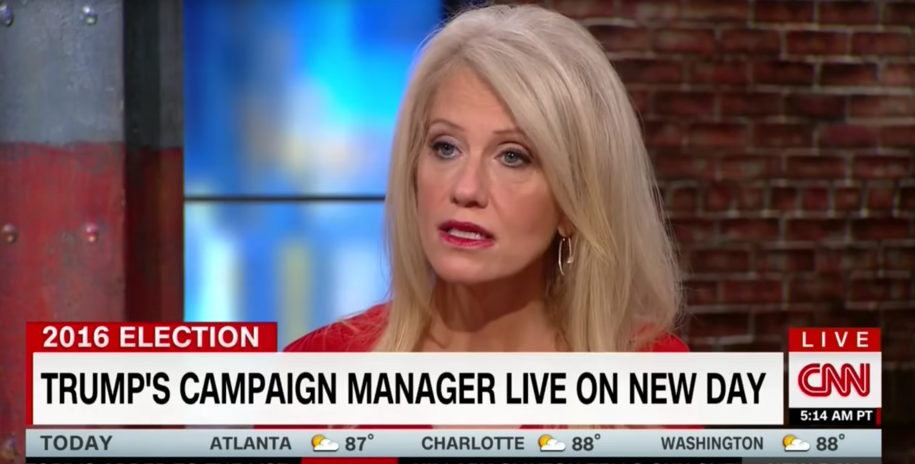 Kellyanne Conway doesn’t “appreciate” all this emphasis on the media serving as fact-checkers.

Tallying up Donald Trump’s perpetual lies is suddenly all the rage, with both the New York Times and Politico posting back-to-back stories on Trump’s penchant for lying.

Now his campaign is making a desperate bid to make sure debate moderators don’t fact-check Donnie’s deceits on the fly. Here’s campaign manager Kellyanne Conway pushing back against the idea Sunday on “This Week”:

“I really don’t appreciate the campaigns thinking it is the job of the media to go and be these virtual fact-checkers,” Kellyanne Conway said, in an apparent attempted jab at the Clinton campaign.

She also declared that Matt Lauer did a “great job” at the Commander in Chief Forum—a sure sign Lauer did a crappy job if you needed more proof.

Meanwhile, Mike Pence took a stab at working the refs in advance of the debate by floating his own lie about CNN anchor Candy Crowley’s correction of Mitt Romney in a 2012 debate:

“Well, I think we all had this experience a few years ago of Mitt Romney being interrupted and being challenged on an assertion he made,” Pence said.  “I believe it was about the tragedy in Benghazi, and it turned out the moderator was wrong.”

Sorry, Mike, Crowley was not wrong. Pence went on to assure CBS’s John Dickerson Sunday that during Monday’s debate Trump would “absolutely…speak the truth to the American people.” Uh-huh.