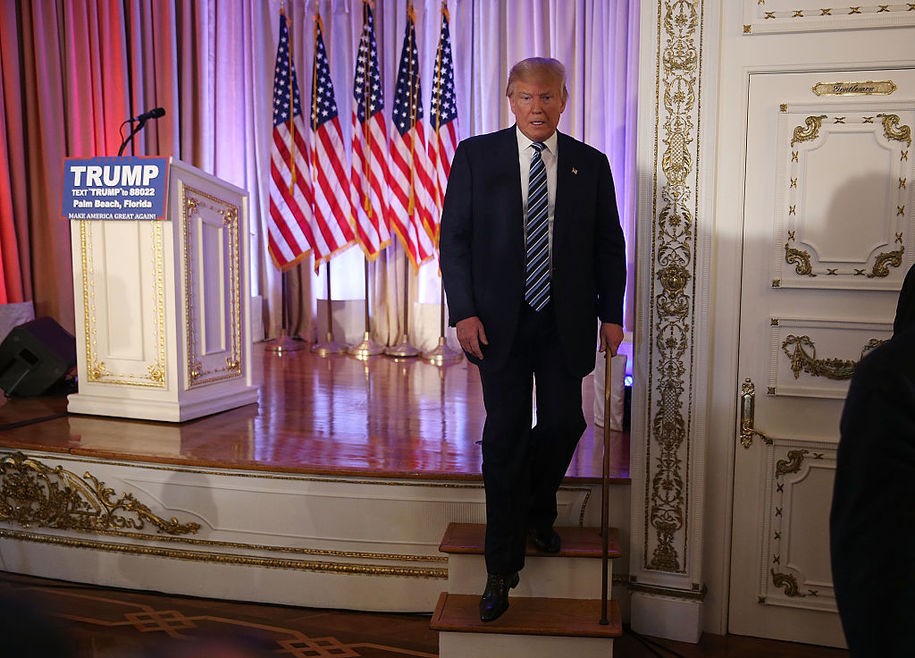 Trump leaves the stage at Mar-A-Lago in Florida

It seems almost impossible that, on a morning where the Republican nominee is urging America to watch a sex tape as part of an effort to shame a woman he hasn’t seen in over a decade, and dealing with an expanding investigation into his slush fund/”charity” where the list of violations seems to grow every day, that there could be another big wave about to break over the Trump campaign.

Readers of the Miami Herald are waking up to more news about Trump’s activities in Cuba and it has Florida politics on a high boil.

Revelations that Donald Trump’s hotel and casino company secretly spent money trying to do business in Cuba in violation of the U.S. trade embargo roiled Miami politics Thursday, forcing top Cuban-American Republicans to express concern about Trump’s dealings while maintaining that the allegation isn’t reason enough to disavow the presidential nominee yet.

Some people may not be at the “disavow” stage, but others clearly are, as Trump’s Florida spokesperson Healy Baumgardner, resigned this week.

“It is clear the campaign is now going in a direction I am no longer comfortable with.”

Down. That would be the direction.

On Thursday, Trump’s campaign manager managed a inadvertent confirmation that Trump had broken the laws.

Read the entire story. It starts out with a screaming headline, as it usually does, that he did business in Cuba. And it turns out that he decided not to invest there. They paid money, as I understand, in 1998 — and we’re not supposed to talk about many years ago when it comes to the Clintons.

That money Trump paid in 1998? That went to consultants to look at opportunities in Cuba … which was, and still is, illegal. Trump was also on the “didn’t do business” talking point, but of course he had to add some insults.

“I never did business in Cuba. There’s this guy who has a very bad reputation as a reporter. You see what his record is. He wrote something about me in Cuba. No, I never did anything in Cuba. I never did a deal in Cuba,” he told NH1 News.

But the accusation isn’t that Trump opened a hotel or invested in a casino. It’s that he looked into opportunities.

A story published in Newsweek said Trump’s firm spent as much as $68,000 on a “foray” exploring business possibilities in Cuba in 1998, which would be a clear violation of the strict embargo in place at the time.

It’s not just a violation of the law, it’s more than enough to put Trump’s hands all over the third rail of Florida politics.

Two other Miami Republicans in Congress, Reps. Carlos Curbelo and Ileana Ros-Lehtinen, have refused to back Trump. Curbelo told the Miami Herald on Thursday that Trump “should explain what happened in 1998.”

“No one is above the law,” he said, though Newsweek reported that the statute of limitations against any action against Trump has expired.

True enough. It’s very unlikely that anyone is going to “lock him up” for this. But that doesn’t matter, so long as Americans lock him out.

How could this revelation affect Trump’s chances in Florida?

Don’t run afoul of Florida’s expatriate Cuban community. It’s one of those iron-clad rules that Republican presidential nominees have obeyed since the rise of Fidel Castro – and it’s now another rule that Donald Trump has apparently broken.

The most recent poll in Florida has Clinton up by a slim margin. However, that’s pre-debate and pre-Cuba story.

Previous article
In and Around Park Forest for the Week of October 2, 2016
Next article
Wisconsin Flouting Judge’s Orders, Continuing to Disenfranchise Black Voters