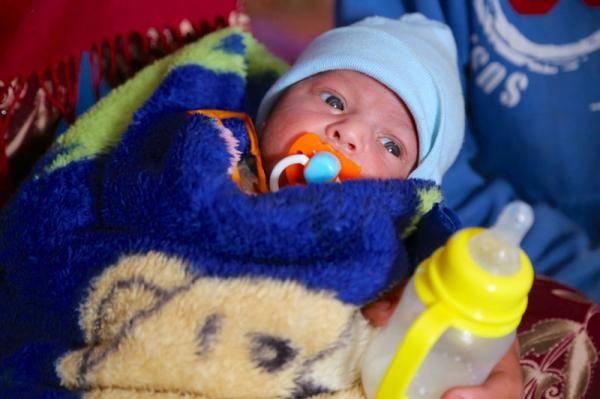 A baby displaced by the conflict in Mosul, shelter at the Qayara emergency site, in Ninewa governorate, Iraq. Photo: IOM/Hala Jaber

“The stories of the survivors are heart-breaking,” said Thomas Lothar Weiss, Iraq Chief of Mission of the International Organization for Migration (IOM), in a press release.

Since the start of Iraqi forces’ efforts to retake the city’s western section on 19 February, more than 10,000 people have been displaced in the zone, according to Iraq’s Ministry of Migration and Displacement (MoMD).

“We are very worried about the fate of the tens of thousands of families still trapped inside of West Mosul,” said Mr. Weiss.

IOM reported some 1,650 people arrived today at the Hamam al-Aleel facility, and nearly 2,800 arrived at Qayara air strip on Sunday night. Both these locations are in Nineweh Governorate southeast of Mosul.

MoMD estimates another 3,000 individuals are already moving towards the checkpoints and are expected to arrive tomorrow

. These numbers, among the largest in weeks, are just a fraction of the 250,000 or more people who could yet be displaced from western Mosul as fighting escalates, said IOM Iraq press officer Hala Jaber.

. “There is serious concern for the 750,000 trapped in the densely populated western sector, with conditions worsening daily, according to reports and testimonies from those who have managed to escape,” she said.

Those who arrived at the Qayara site yesterday, including children, spoke of seeing dead bodies on the streets as they escaped. Many corpses, they said, were ISIL fighters; others civilians killed by Improvised Explosive Devices (IEDs) laid by militants.

Families escaping with children are reportedly taping their mouths with duct tape to ensure they don’t cry or make a sound that would alert ISIL. Other families are giving their children sleeping pills or Valium to keep them quiet during their escape.