Pain and Punishment for Symptoms Behind Bars 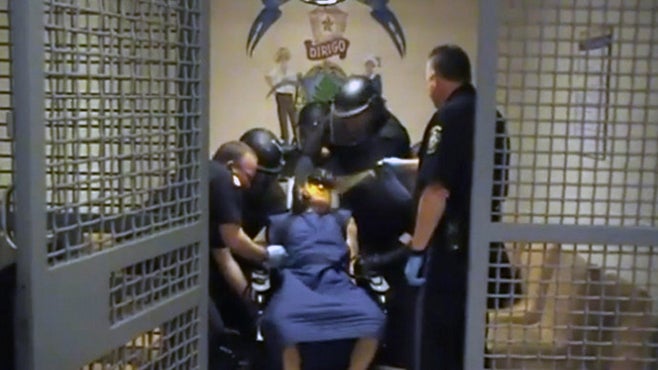 Image of Paul Schlosser III, who is diagnosed with bipolar disorder and depression, being pepper sprayed on June 10, 2012 by a correctional officer at the Maine Correctional Center in Windham, Maine. The image is a screengrab of a video of the incident which was taken by officers at the prison, and which is posted on YouTube at https://www.youtube.com/watch?v=0MN4ngibpHs

New York –(ENEWSPF)–May 12, 2015.  Jail and prison staff throughout the United States have used unnecessary, excessive, and even malicious force against prisoners with mental disabilities, Human Rights Watch charged in a report released today.

The 127-page report, “Callous and Cruel: Use of Force against Inmates with Mental Disabilities in US Jails and Prisons,” details incidents in which correctional staff have deluged prisoners with painful chemical sprays, shocked them with powerful electric stun weapons, and strapped them for days in restraining chairs or beds. Staff have broken prisoners’ jaws, noses, ribs; left them with lacerations requiring stitches, second-degree burns, deep bruises, and damaged internal organs. In some cases, the force used has led to their death.

“Jails and prisons can be dangerous, damaging, and even deadly places for men and women with mental health problems,” said Jamie Fellner, US program senior adviser at Human Rights Watch and the author of the report. “Force is used against prisoners even when, because of their illness, they cannot understand or comply with staff orders.”

Although no national data are available, Human Rights Watch’s research indicates that unwarranted, excessive, and punitive force against prisoners with mental health problems is widespread and may be increasing in the more than 5,100 jails and prisons in the United States. Experts blame deficient mental health treatment, inadequate use-of-force policies, insufficient staff training, and poor leadership.

This report examines the use of force against inmates with mental disabilities in jails and prisons across the United States. Human Rights Watch reviewed hundreds of individual and class action court cases and Justice Department investigations, and interviewed more than 125 current and former corrections officials, use of force experts, psychiatrists, and prisoner advocates, to identify policies and practices that lead to unwarranted force and recommend changes.

In one case, staff at a California prison sprayed a prisoner approximately 40 times with pepper spray, and threw four pepper spray grenades into his cell after the man, who claimed to be “The Creator,” resisted removal from his cell.

In another, a Florida prisoner diagnosed with schizophrenia defecated on the floor of his cell and refused to clean it up. Officers allegedly put him in a scalding shower knowing he could not control the water’s temperature or flow. After being left in the shower for more than an hour, the inmate was dead.

An estimated one in five prisoners in the US has a serious mental illness, including schizophrenia, bipolar disorder, and major depression, and an estimated 5 percent are actively psychotic at any given moment. Prisoners with such conditions often find it difficult to cope with the extraordinary stresses of incarceration and to comply with the prison regimen and staff orders. Untreated or undertreated because of inadequate mental health services, these prisoners may engage in conduct correctional staff consider annoying, bizarre, frightening, disruptive, or dangerous. They may refuse to obey orders, and they break the rules at higher rates than other prisoners. The default response of staff may be the use of force.

Corrections experts say that best practices require special use of force measures for prisoners whose disruptive behavior is symptomatic of mental illness. For example, following recent class action litigation, prison officials in Arizona and California are adopting policies that greatly restrict the use of chemical sprays on prisoners with mental illness except in an emergency. But most agencies lack such policies. Similarly, most agencies do not train their staff to understand the impact mental illness can have on behavior and to use verbal negotiation strategies to end disruptive behavior without force.

Public officials should reduce the number of prisoners with mental disabilities confined in prisons and jails, including by increasing the availability of community mental health resources and access to criminal justice diversion programs. Officials should also improve mental health services in prisons and jails; and ensure that correctional facilities adopt and follow sound policies on using force that take into account the unique needs and vulnerabilities of prisoners with mental illness. Officials should use training to enforce these policies and include mechanisms for holding accountable staff who violate them.

“Custody staff are not trained in how to work with prisoners with mental disabilities, how to defuse volatile situations, or how to talk prisoners into complying with orders,” Fellner said. “All too often, force is what staff members know and what they use. In badly run facilities officers control inmates, including those with mental illness, through punitive violence.”

Human Rights Watch identified cases that it believes constituted unnecessary, excessive, or malicious use of force against prisoners with mental disabilities:

At 3:30 a.m. on March 17, 2013, Colorado prison staff found Christopher Lopez, a 35-year-old with schizoaffective disorder, bipolar type, lying face down on the floor of his cell, semi-conscious and barely able to move. Staff did not take him to the prison clinic or call for medical help. Instead, as shown in a publicly available video, the officers handcuffed him, fastened the cuffs to a belly chain, shackled his ankles, and chained him in a restraint chair. A couple of hours later they removed Lopez from the chair and left him on the floor of another cell, still in restraints, still scarcely able to move, his breathing increasingly labored. Lopez died at around 9 a.m. from hyponatremia, a blood condition that is treatable with prompt medical attention.

Robert Sweeper was booked into a South Carolina jail on February 7, 2013, charged with trespassing after police found him sleeping in a classroom building doorway on a cold night. Sweeper was uncooperative, disoriented, and incoherent, but staff did not send him to a hospital for psychiatric care. During a routine search of Sweeper’s cell, an officer twisted Sweeper’s wrist and arm, and repeatedly kicked him in the upper body, puncturing his lung, breaking three ribs and fracturing two vertebrae.

Nick Christie, an agitated and confused 62-year-old man who had recently stopped taking his medications for depression and anxiety, was jailed in Florida in 2009 for a nonviolent misdemeanor. Locked in a cell and not receiving any mental health services, he kept yelling and banging on the cell door. Deputies sprayed him with chemical spray more than a dozen times in a 36-hour period and immobilized him in a restraint chair with a spit mask covering his face. He died from cardiac arrest.

Marie Franks, a 58-year-old woman with bipolar disorder, was incarcerated in an Iowa jail in the fall of 2013, after she made multiple non-emergency calls to 911 and then resisted arrest. She did not receive her prescription medications while in jail and her mental health deteriorated. On October 7, she refused to voluntarily change her jumpsuit and swore at the jail staff. In response, a jail deputy shocked her with a Taser several times in eight minutes.