This animation of GPM data shows Hurricane Matthew from Oct. 4 through 6, 2016. On Oct. 4 Matthew’s eye made landfall over Haiti. GPM’s saw tremendous amounts of rainfall throughout Haiti. On Oct. 6 Matthew approached Florida where outer bands of precipitation were near the Florida coast. GPM revealed the massive amounts of rainfall being produced by this storm as it begins to impact Florida.  Credits: NASA SVS

An eyewall consists of powerful thunderstorms in the area immediately outside the eye of a hurricane. Those storms have very heavy rainfall and strong winds.

“GPM had a recent overpass at 3:06 p.m. EDT that shows that Matthew is undergoing an eyewall replacement cycle,” said Scott Braun, research meteorologist at NASA’s Goddard Space Flight Center in Greenbelt, Maryland. “The GPM image showed concentric rings of precipitation. The inner ring is the original eyewall, the larger outer ring is the new one.” 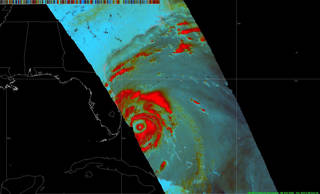 “When this occurs, there is a transition from a small, extremely intense inner core of winds to a larger wind field that is not as intense at its maximum, but more spread out. In Matthew’s case, the winds have weakened from 140 to 120 mph moving it from category 4 to 3,” Braun said.

The larger eye means that the center of the storm does not have to track as close to the coast for the coast to experience the strong winds in the eyewall.

Matthew is moving toward the north-northwest near 13 mph (20 kph), and this general motion is expected to continue today. NHC said turn toward the north is expected tonight or Saturday.  On the forecast track, the center of Matthew will be moving near or over the east coast of the Florida peninsula through tonight, and near or over the coasts of Georgia and South Carolina on Saturday, Oct. 8. 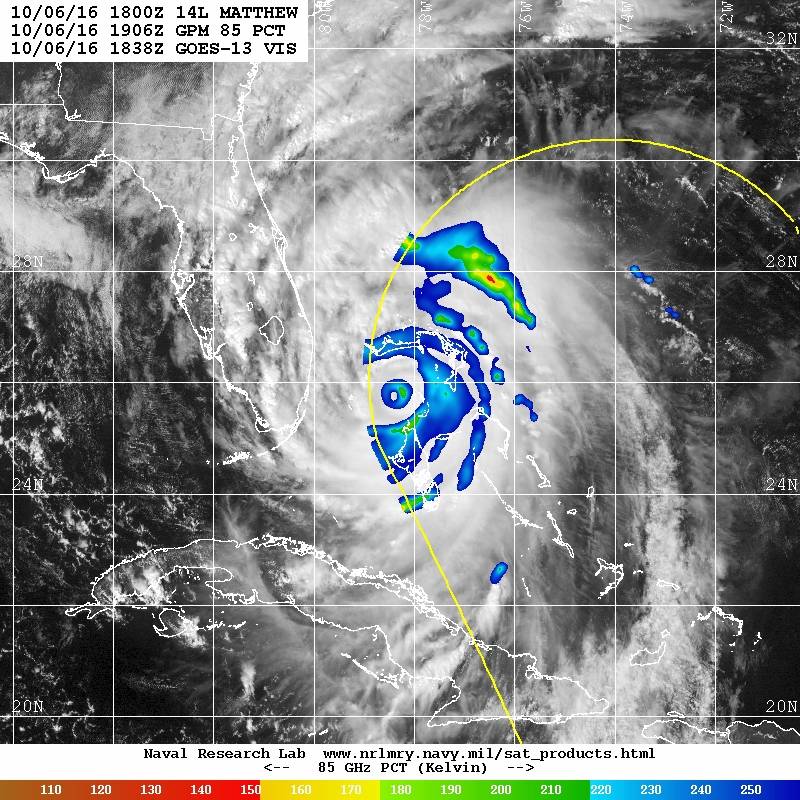 On Oct. 6 at 3:06 p.m. EDT, GPM showed that Matthew was undergoing an eyewall replacement cycle and the concentric rings of precipitation were apparent. The inner ring is the original eyewall, the larger outer ring is the new one. GPM data was overlaid on visible cloud data from NOAA’s GOES-East satellite.  Credits: NASA/JAXA/NRL/NOAA

The latest minimum central pressure reported by the reconnaissance aircraft was 944 millibars.