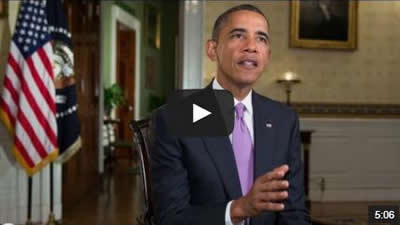 Hi, everybody. It was five years ago this week that a financial crisis on Wall Street spread to Main Street, and very nearly turned a recession into a depression.

In a matter of months, millions of Americans were robbed of their jobs, their homes, their savings – after a decade in which they’d already been working harder and harder to just get by.

It was a crisis from which we’re still trying to recover. But thanks to the grit and determination of the American people, we are steadily recovering.

Over the past three and a half years, our businesses have created seven and a half million new jobs. Our housing market is healing. We’ve become less dependent on foreign oil. Health care costs are growing at the slowest rate in 50 years. And in just over a week, millions of Americans without health care will be able to get covered for less than $100 a month.

So our economy is gaining traction. And we’re finally tackling threats to middle-class prosperity that Washington neglected for far too long. But as any middle-class family listening right now knows, we’ve got a long way to go to get to where we need to be. And after five years spent digging out of crisis, the last thing we need is for Washington to manufacture another.

But that’s what will happen in the next few weeks if Congress doesn’t meet two deadlines.

First: the most basic Constitutional duty Congress has is passing a budget. But if it doesn’t pass one before September 30th – a week from Monday – the government will shut down. And so will many services the American people expect. Military personnel, including those deployed overseas, won’t get their paychecks on time. Federal loans for rural communities, small business owners, and new home buyers will be frozen. Critical research into life-saving discoveries and renewable energy will be immediately halted. All of this will be prevented if Congress just passes a budget.

Second: Congress must authorize the Treasury to pay America’s bills. This is done with a simple, usually routine vote to raise what’s called the debt ceiling. Since the 1950s, Congress has always passed it, and every President has signed it – Democrats and Republicans, including President Reagan. And if this Congress doesn’t do it within the next few weeks, the United States will default on its obligations and put our entire economy at risk.

This is important: raising the debt ceiling is not the same as approving more spending. It lets us pay for what Congress already spent. It doesn’t cost a dime, or add a penny to our deficit. In fact, right now, our deficits are already falling at the fastest rate since the end of World War II. And by the end of this year, we’ll have cut our deficits by more than half since I took office.

But reducing our deficits and debt isn’t even what the current standoff in Congress is about.

Now, Democrats and some reasonable Republicans are willing to raise the debt ceiling and pass a sensible budget – one that cuts spending on what we don’t need so we can invest in what we do. And I want to work with those Democrats and Republicans on a better bargain for the middle class.

Think about that. They’d actually plunge this country back into recession – all to deny the basic security of health care to millions of Americans.

The United States of America is not a deadbeat nation. We are a compassionate nation. We are the world’s bedrock investment. And doing anything to threaten that is the height of irresponsibility. That’s why I will not negotiate over the full faith and credit of the United States. I will not allow anyone to harm this country’s reputation, or threaten to inflict economic pain on millions of our own people, just to make an ideological point.

So, we are running out of time to fix this. But we could fix it tomorrow. Both houses of Congress can take a simple vote to pay our bills on time, then work together to pass a budget on time.

Then we can declare an end to governing by crisis and govern responsibly, by putting our focus back where it should always be – on creating new jobs, growing our economy, and expanding opportunity not just for ourselves, but for future generations.