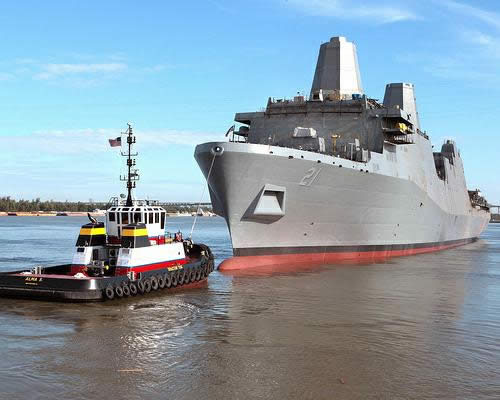 Additionally, 170 members of the 9/11 Families Association, which includes families of victims and first responders, will embark the USS New York for the transit from Norfolk, Va., to New York Harbor.

“I am grateful to the mayor and his office for their tremendous support this past month as we worked together to ensure the USS New York and her crew were able to represent the Navy in New York. Every member of the crew has a tremendous sense of mission and appreciation of the unique role their ship plays for the citizens of New York. She is an emblem of the strength and renewed spirit of a city that was damaged but never defeated. She and her crew belong with the family members of the victims and the first responders in New York City on the tenth anniversary of 9-11,” said Mabus.

“With the steel from the World Trade Center in her bow, the USS New York represents a powerful symbol of the deeply personal connection that New Yorkers have with our military and is a symbol of the courage and resilience of our nation,” said Bloomberg. “She helps protect the freedoms that make this the world’s most diverse and tolerant city and we are honored to welcome the men and women of the USS New York back to our city.”

The ship is scheduled to be pier side in Manhattan Sept. 8-9 and will anchor in the Hudson River Sept. 10-12. On Sept. 11, the USS New York will move from its anchorage in the Hudson River to a location within sight of the World Trade Center. Members of all branches of the military, including Navy and Marine Corps service members from the USS New York, will participate in the honor guard during the city’s commemoration ceremony.

The USS New York is the sixth U.S. Navy ship to be named to honor the state of New York. Her bow stem includes seven and a half tons of steel recovered and re-forged from the World Trade Center’s twin towers. The ship features many design elements and furnishings throughout her interior that serve as tributes to the events of 9/11. The ship’s motto is “Strength forged through sacrifice. Never forget.”