Threat Of Flooding Rain, Severe Storms To Return To Central Us At Midweek 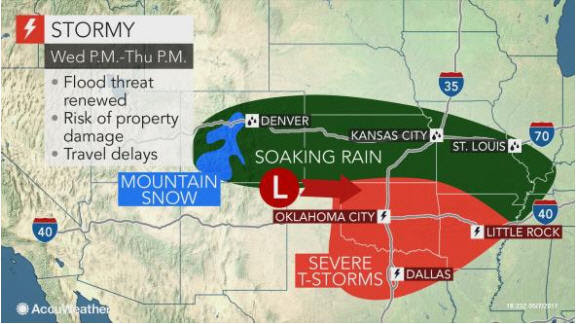 AccuWeather-(ENEWSPF)- AccuWeather reports rain and thunderstorms will return to storm-weary areas of the central and southern Plains around the middle of the week.

The thunderstorms will follow a much-needed dry spell into Tuesday. Many areas continue to recover from extensive flooding and severe weather from this past week.

The threat for delays on the road and in the air and disruptions to outdoor activities will mount from Wednesday to Thursday. Even worse, the resurgence of stormy weather will hinder the recession of streams and rivers, delay cleanup efforts and potentially cause new storm damage and flood problems.

Residents from Kansas to Missouri and southward to Texas, Oklahoma and Arkansas should be particularly watchful of the forecast over the coming days.

“A complex weather pattern will bring the return of stormy weather to the central and southern Plains and the middle and lower Mississippi Valley around the middle of the week,” AccuWeather Meteorologist Jake Sojda said.

Two slow-moving storms will plague the Northeast and Southwest.

“In between these storms, a large north-south temperature difference over only a few hundred miles stretching from around Kansas and Missouri through the Ohio Valley will serve as the focus for heavy rain and thunderstorms,” Sojda said.

There is the potential for some locations from Kansas to Ohio to pick up several inches of rain in this setup.

The saturated nature of the soil from prior rainfall has rendered the ground incapable of absorbing much additional moisture. Less than 2 inches of rain in a three-hour time frame will be enough to trigger flash flooding from Missouri to Ohio, according to the National Weather Service River Forecast Center.

“This could exacerbate the ongoing flooding problems,” Sojda said.

As is typically the case during the spring months, there will be the potential for severe weather to erupt. This threat will be greatest from the Texas and Oklahoma panhandles at midweek to Arkansas and Louisiana by late week.

Oklahoma City; Wichita Falls and Dallas, Texas; Little Rock, Arkansas; and Shreveport, Louisiana could be rocked by severe weather during the second half of the week.

The most intense thunderstorms can cause extensive tree and power line damage from high winds and large hail, in addition to the flood concerns from torrential downpours. Should all the right ingredients come together, a few tornadoes could spin up as well.

Should the anticipated track of the storm shift northward or southward over the next few days, the threat for severe weather and soaking rain can also shift in either direction.

The storm will slowly emerge from the Central states heading into late week and Mother’s Day weekend.

The threat of heavy rain and thunderstorms will shift into the Southeast and possibly even the Northeast by next weekend, according to Sojda.

Previous articleChilly Air To Threaten A Frost In Parts Of The Northeastern Us This Week
Next articleAddicted to the War on Drugs: Just as We Were Wising Up, President Trump has Us Back In an Old-style Fight Against Narcotics