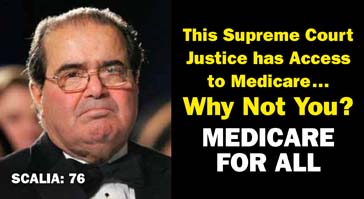 With nearly half the Supreme Court justices who will pass judgment on the 2010 healthcare law beyond the age where they have to worry about their access to care, the nation’s leading voice of nurses said today that all Americans should have the same level of security about their health.

That guarantee could be achieved by extending Medicare, for which four of the nine judges already qualify, to everyone, without raising constitutional questions posed by the individual mandate that forces everyone without coverage to buy private, commercial health insurance, noted the 170,000-member National Nurses United in a statement today.

“For these judges, that means no concerns about being bankrupted by medical bills, denied needed treatment because some insurance agent deemed it ‘experimental’ or ‘not medically necessary,’ barred from choosing the provider of their choice because they were ‘out of network’ or forced to keep an unwanted job to maintain their present employer-paid coverage,” said NNU Co-President Karen Higgins.

“Regrettably, every one of those barriers would also exist under the Affordable Care Act. But none of them exist for Americans who have reached 65 and become eligible for healthcare. And if guaranteed healthcare is good enough for people over 65, it ought to be good enough for all Americans,” said Higgins.

“The Obama administration and Congress could have pre-empted the legal fight over their law by instead just expanding Medicare, a more humane, cost effective system which has no constitutional questions, to everyone under 65,” Higgins noted.

“Even now, Congress and the President could pre-empt an adverse court ruling by passing Medicare for all legislation currently in Congress, S 915 and HR 1200, and end our healthcare nightmare once and for all,” Higgins said.