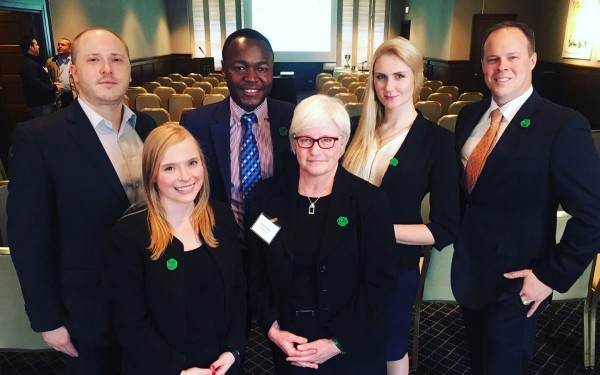 CHICAGO–(ENEWSPF)–April 24, 2017.  Roosevelt University’s Marshall Bennett Institute of Real Estate is pleased to announce a team of its students has won the seventh annual Eisenberg Real Estate Challenge, beating teams from five other regional universities. The announcement took place at an awards ceremony held April 8 at the Standard Club in Chicago.

This year’s challenge focused on a parcel of city of Chicago and Imperial Realty Company-owned land that was formerly the home of the U.S. Sixth Army Headquarters and Quartermaster Depot and the headquarters of the Chicago Public Schools. The site is bounded by a train depot to the south, South Western Boulevard to the west, South Ashland Boulevard to the east and West Pershing Road to the north.

Each team acted as a separate development company responding to a Request for Proposal from the city of Chicago and Imperial Realty Company to purchase the site and redevelop it into a dynamic project.  Proposals outlined a transformative development plan that would redevelop the district into a dynamic real estate project with the most optimal financial returns for the sellers.

The Roosevelt team won the 2017 Challenge title for its exceptional presentation concept titled The Innova District, which calls for redevelopment of more than 3 million square feet of industrial buildings in Chicago’s Central Manufacturing District on the city’s southwest side. The Roosevelt proposal included detailed market analysis, proposed uses, conceptual drawings, a financing plan and marketing identity.

The winning university receives a $5,000 scholarship and the winning team is honored at the fall foundation dinner attended by more than 700 industry professionals.