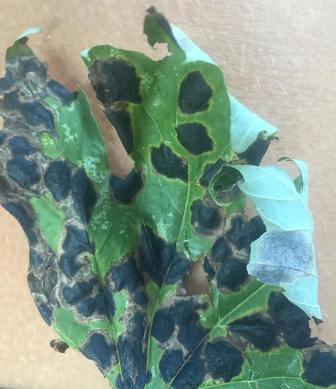 Park Forest, IL–(ENEWSPF)–August 27, 2016.  Large, unsightly, black spots on maple trees have become quite noticeable in Park Forest during the past several weeks. Park Forest’s Recreation and Parks Department has received many calls from residents inquiring about them.

Village Arborist Todd Cann says this is a common condition called tar spot and is actually a fungal disease caused by fungi in the genus Rhytisma. It is particularly prevalent this year because of environmental conditions that have favored the spread of this disease.

Symptoms first appear in late spring or early summer as infected leaves develop light green or yellow-green spots. During mid to late summer, black tar-like raised structures are formed on the upper surface of leaves within the yellow spots. While unsightly, tar spot is a foliar disease and does not affect other parts of maple trees. It is seldom detrimental to the overall health of infected trees and is not known to kill trees. The biggest single result of this disease is premature leaf drop which usually occurs relatively close to the time of natural leaf drop or senescence.

The tar-like spot is a fruiting structure of the fungus that survives the winter on fallen leaves. In the spring, mature spores of the fungus are released and blown by wind to newly emerging leaves. Village Arborist Cann also says that because the fungi do overwinter on the leaves it is
best that residents rake the leaves and dispose of them and not to use them as mulch.

Please call Recreation & Parks at 708-748-2005 if you have questions on this or any other tree related matter.