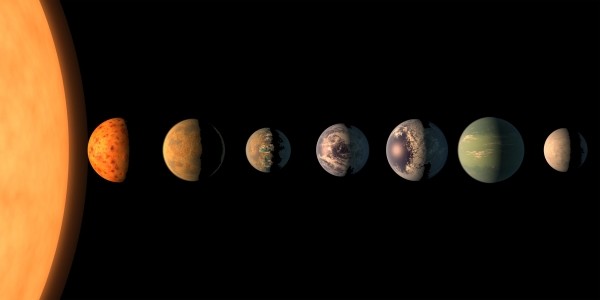 Illustration shows what each of the TRAPPIST-1 planets may look like, based on available data about their sizes, masses and orbital distances. Illustration by: NASA/JPL-Caltech

CHICAGO–(ENEWSPF)–April 27, 2017
By: Greg Borzo
After NASA announced in February the discovery of a solar system with seven planets—three of which were deemed potentially habitable—UChicago postdoctoral scholar Sebastiaan Krijt began wondering: If a life form existed on one of these planets, could space debris carry it to another?

In research recently published in Astrophysical Journal Letters, Krijt and fellow UChicago scientists conclude that life forms, such as bacteria or single-cell organisms, could travel through the newly discovered TRAPPIST-1—an unusual solar system that presents an exciting new place in the Milky Way to search for extraterrestrial life.

“Frequent material exchange between adjacent planets in the tightly packed TRAPPIST-1 system appears likely,” said Krijt, the study’s lead author. “If any of those materials contained life, it’s possible they could inoculate another planet with life.” 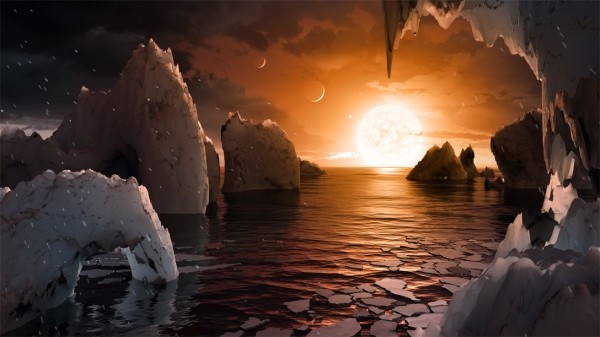 Illustration shows the possible surface of TRAPPIST-1f, one of the seven recently discovered Earth-sized exoplanets. Illustration by: NASA/JPL-Caltech

The researchers ran several simulations for TRAPPIST-1 and found that the process could occur over a period as short as 10 years. Most of the mass transferred between planets that would be large enough for life to endure irradiation during transfer and heat during re-entry would be ejected just above escape velocity, they concluded.

“Given that tightly packed planetary systems are being detected more frequently, this research will make us rethink what we expect to find in terms of habitable planets and the transfer of life—not only in the TRAPPIST-1 system, but elsewhere,” said Fred Ciesla, UChicago professor of geophysical sciences and a co-author of the paper. “We should be thinking in terms of systems of planets as a whole, and how they interact, rather than in terms of individual planets.”

The first exoplanet, a planet orbiting a star other than the sun, was confirmed in 1992. Today, more than 3,600 exoplanet candidates have been discovered, with at least 3,000 additional candidates waiting to be confirmed. In addition, more than 600 multiple exoplanetary systems have been confirmed.

“The relatively new field of exoplanetology is exploding and being considered more seriously than ever,” Ciesla said. “If we took the solar system as a model, we could never have imagined the things we’re finding, such as the recent discovery of a planet that orbits two suns.”

The push now is not so much to discover new exoplanets but rather to characterize them, determine how they evolved and understand how they interact, Krijt said.

Exoplanetary systems serve as laboratories to help scientists comprehend the solar system, Ciesla said, noting that 40,000 tons of space debris falls to Earth each year. “Material from Earth must be floating around out there, too, and it’s conceivable that some of it might be carrying life. Some forms of life are very robust and could survive space travel.”