Washington, DC–(ENEWSPF)–November 15, 2016. Three federal entities, including NASA, are reaffirming their commitment to search for Antarctic meteorites, to help learn more about the primitive building blocks of the solar system and answer questions about Earth’s neighbors like the moon and Mars. 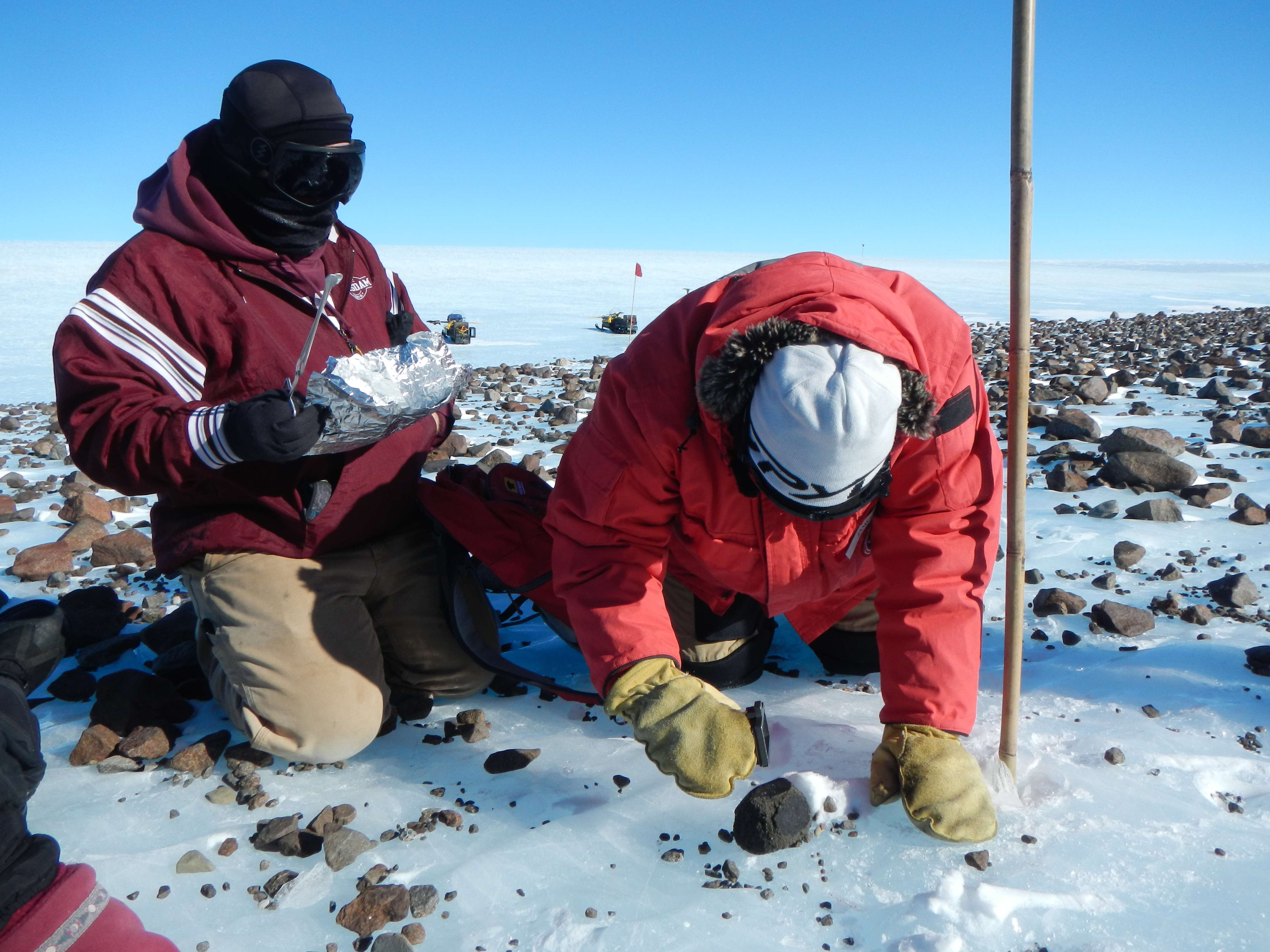 Members of the Antarctic Search for Meteorites (ANSMET) program collect a carbonaceous chondrite meteorite from a glacial moraine at the base of Mt. Ward, Antarctica.  Credits: Christine Floss

NASA, the National Science Foundation (NSF) and the Smithsonian Institution (SI) recently renewed their agreement to search for, collect and curate Antarctic meteorites in a partnership known as ANSMET—the Antarctic Search for Meteorites Program. The signing of this new joint agreement advances the program for an additional decade, replacing an earlier agreement signed in 1980.
Since the U.S. began searching for meteorites in Antarctica in 1976, the ANSMET program has collected more than 23,000 specimens, dramatically increasing the number of samples available for study from Earth’s moon, Mars and asteroids. Among them are the first meteorites discovered to come from the moon and Mars, and the well-known ALH 84001 Martian meteorite, which helped renew interest in Mars exploration in the 1990s. 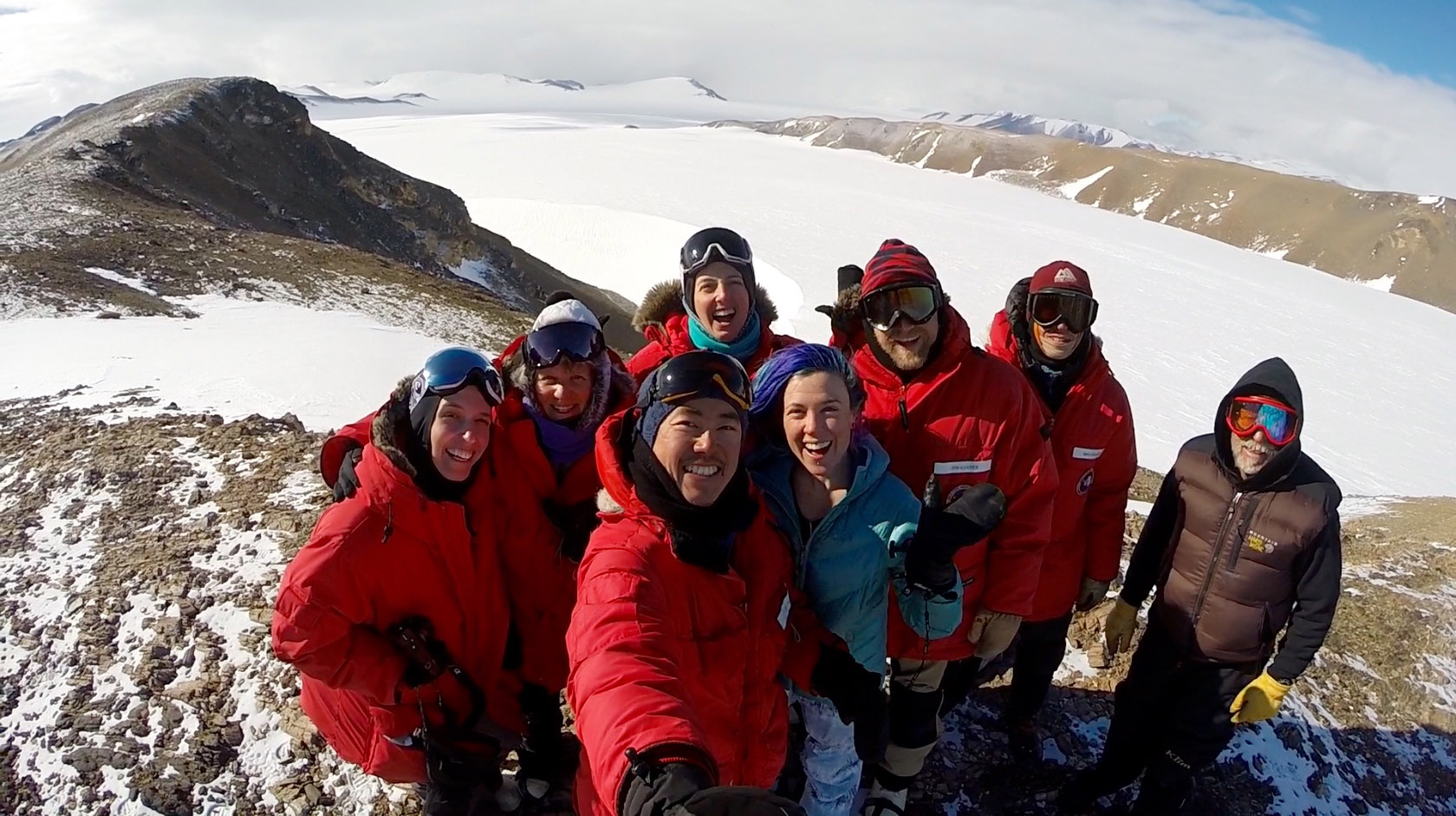 ANSMET team members break for a selfie atop a peak in the Miller Range, Antarctica. The team searches for meteorites in the harsh environment of Earth’s southernmost continent on foot and on snowmobiles.  Credits: Constantine Tsang

Meteorites are natural objects that fall to Earth from space and survive intact so they can be collected on the ground, or — in this case — on ice.  Antarctica provides a unique environment for the collection of meteorites, because the cold desert climate preserves meteorites for long periods of time. Movements of the ice sheets can concentrate meteorites in certain locations, making them relatively easy for scientists to find. To search for meteorites, ANSMET deploys small field parties during the Antarctic summer (winter in the northern hemisphere). Even in summer conditions are harsh, with temperatures dropping to well below zero degrees Fahrenheit (-18 degrees Celsius). The ANSMET teams are flown to remote areas, where they live in tents on the ice and search for meteorites using snowmobiles or on foot.

Meteorites come from a variety of places in the solar system. Most meteorites originated on asteroids, which are remnants of the materials from which the planets formed. Meteorites collected by ANSMET have been determined by scientists who study them to come from dozens of different asteroids.

Impacts of asteroids on the ancient Earth and other bodies in the solar system also may have played a significant role in the delivery of volatiles (like water) and organic molecules (such as amino acids) to planetary bodies, which, in turn, could have been important to the development of life. According to Smithsonian meteorite scientist Tim McCoy, “Antarctic meteorites are posing new questions about the formation and early history of our solar system. Some of these questions are spurring new exploration of the solar system by NASA missions.”

A few meteorites originated on the moon and Mars—blasted off the surfaces by large asteroid impacts and later falling to Earth. The lunar meteorites may come from parts of the moon not visited by astronauts in the 20th century, and they extend our knowledge of Earth’s companion and how it formed. Martian meteorites are humankind’s only specimens of rocks known to be from another planet.  We know they come from Mars by studying their ages and compositions, and comparing their properties to measurements taken by U.S. robotic missions to the surface of Mars.

Meteorites in Antarctica may only be collected for the purpose of scientific research. Under U.S. law, they must be properly collected, documented, handled, and curated. Logistical support to the collection teams while in Antarctica is provided by NSF, which manages the U.S. Antarctic Program. ANSMET meteorites are characterized and curated jointly by NASA and the SI. They are made available by NASA and the SI for study by scientists in the U.S. and around the world, which has resulted in thousands of scientific publications since the program began. As Jeffrey Grossman, program scientist for curation at NASA Headquarters, observed, “The vast scientific value of the ANSMET collection comes not only from the meteorites themselves, but also from the fact they are deposited in two of the finest curation facilities in the world — at NASA and the Smithsonian — and are made freely and promptly available to all qualified scientists who want to study them.”

Because meteorites are representative of objects than can (and do) hit the Earth, much of the funding from NASA for the collection of Antarctic meteorites is provided by its Planetary Defense Coordination Office, supported by its Near Earth Object Observations (NEOO) research program. NASA will be exploring a near-earth asteroid called Bennu with the OSIRIS-REx mission, which launched Sept. 8. OSIRIS-REx will collect and return material from the surface of Bennu to Earth in 2023.