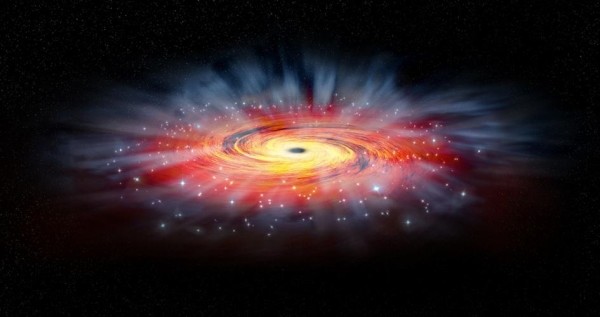 Illustration of the environment around the supermassive black hole Sagittarius A*, located some 26,000 light years away at the center the Milky Way.Illustration by: NASA/CXC/M.Weiss

A powerful network of telescopes around the Earth is attempting to create the first image of a black hole, an elusive gravitational sinkhole that Albert Einstein first predicted in 1915.

The UChicago-led South Pole Telescope is part of the Event Horizon Telescope, which combines eight observatories in six locations to create a virtual Earth-sized telescope so powerful it could spot a nickel on the surface of the moon. Scientists spent ten days in April gathering data on Sagittarius A*, a black hole at the center of the Milky Way, as well as a supermassive black hole about 1,500 times heavier at the center of galaxy M87.

Each radio-wave observatory collected so much data that it could not be transmitted electronically. Instead, it was downloaded onto more than 1,000 hard drives and flown to the project’s data analysis centers at the MIT Haystack Observatory in Westford, Mass., and the Max Planck Institute for Radio Astronomy in Bonn, Germany.

Over the next year, supercomputers will correlate, combine and interpret the data using very long baseline interferometry, a procedure common in astronomy but never implemented on such an enormous scale. The goal is to produce an image of the event horizon, the boundary of a black hole where luminous gases burn at tens of millions of degrees and from which nothing escapes, not even light.

“It all came together for us: telescopes with higher resolutions, better experiments, more computer power, bright ideas, good weather conditions and so on,” said John Carlstrom, the Subramanyan Chandrasekhar Distinguished Service Professor of Astronomy and Astrophysics at UChicago, who leads the South Pole Telescope collaboration. “I’m very confident that we’ll come up with not only a good image, but a better understanding of black holes and gravity.”

The telescopes in the network employ radio dishes that can detect very short wavelengths, even less than a millimeter—the shorter the wavelength, the higher the resolution. Water, dust and clouds of gas can block radio waves, so the telescopes in Event Horizon were selected, in part, for being located in deserts, dry plateaus and mountaintops. Nevertheless, a storm or high winds could have ruined data collection.

Astronomers have taken aim at black holes before, but the big difference this time comes from incorporating the new Atacama Large Millimeter/submillimeter Array and the South Pole Telescope into the virtual network. Located high in the mountains of Chile, ALMA is the most complex astronomical observatory ever built, using 66 high-precision dish antennas with a total collecting area of more than 71,000 square feet. The South Pole Telescope provides the critical north-south resolving power to pick apart the details of Sagittarius A*.

“ALMA is the key to this experiment,” Carlstrom said. “It gives us great sensitivity and at the incredibly short wavelength of 1.3 millimeters. But next year we’ll repeat this experiment at 0.8 millimeters to get an even higher resolution.

“We’ll always be pushing the limits,” he added.