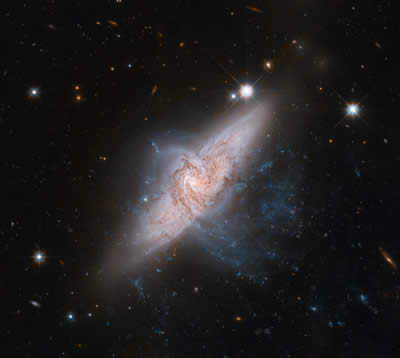 Baltimore, MD-(ENEWSPF)- NASA’s Hubble Space Telescope shows a rare view of a pair of overlapping galaxies, called NGC 3314. The two galaxies look as if they are colliding, but they are actually separated by tens of millions of light-years, or about ten times the distance between our Milky Way and the neighboring Andromeda galaxy. The chance alignment of the two galaxies, as seen from Earth, gives a unique look at the silhouetted spiral arms in the closer face-on spiral, NGC 3314A. The motion of the two galaxies indicates that they are both relatively undisturbed and that they are moving in markedly different directions.

The color composite was produced from exposures taken in blue and red light with Hubble’s Advanced Camera for Surveys. The pair of galaxies lie roughly 140 million light-years from Earth, in the direction of the southern hemisphere constellation Hydra.